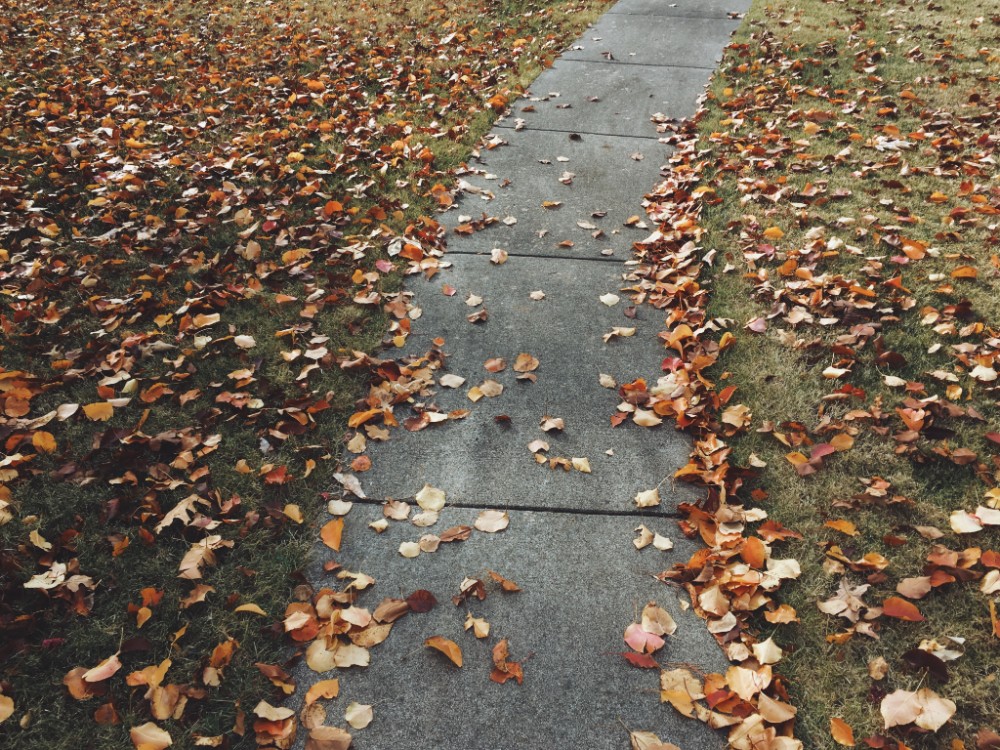 This is a tale told by crumpled autumn leaves in a school playground . . .

Mattie woke to a strange smoky smell. It grew stronger down stairs. In the kitchen, Grandma rubbed vigorously at a grill-pan.

‘I could do with your grandfather’s kippers but they do smell the place out,’ she said.‘One or two rashers suit you?’

He gave the clock a glance.

‘Not for round here. That enough bread and butter?’

Mattie nodded. Ridges of thickly buttered triangles ranged across the breadboard like the Pennines.

‘Right, bacon won’t be long. Let’s have a look at you – best make a good impression on your first day.’

Grandma made him turn round. She straightened his collar and gave him a new tie.

‘Now don’t drip grease down that –it’s only borrowed while I can get you one.’

Mattie sat and ate his breakfast. Odd gusts of singing came closer: a lad’s voice. He sided his pots and looked over the wall of the garth, then ran back inside. His grandmother stepped out of his way.

‘Well, you didn’t think we’d leave you to find your own way, did you?’ she called after him. He brushed his teeth, grabbed his satchel and dashed downstairs two at a time. Tommy swept through the gate in an old greatcoat.

‘School then?’ Tommy said and then grinned. Grandma came to the doorstep. She gave them each a small package done up in greaseproof.

‘Couple of misshapes – want eating up.’

They said thank you and smelled their packages: something sweet and lightly spiced. She ruffled the top of Mattie’s hair. He flattened it down and pulled a face.

The two boys jinked along back ways through Scoresby. They raced down The Bolts with Tommy easily winning on account of his long legs. They skirted the rubbish at the back of a café and ice cream parlour, then took Lifeboat Steps at a gallop. They stopped and panted a moment.

‘See that gable end – that’s it up there on Fisherhead.’

Far off a bell in a small arch glinted. It topped off a white-washed Victorian building with unpainted stone edges. Lots of narrow pointed windows ran down from the steep roof. It was more glass than wall.

They climbed up past tiny back gardens crammed with vegetable plants, past stone-flagged yards full of lobster creels and walls draped with nets. A cat to greeted Tommy and accepted a stroke.

A bell clanged twice. Mattie gave a small start. The cat ran off.

Tommy gave a slow smile and shook his head once.

‘That’s the starting bell for the Hob Wykers and them from Furzedale.’

A stile led into the schoolyard. One group of children kept to the shadowy side. They perched on the low wall of a cramped playground and avoided stumps of old railings. Tommy went towards the others charging about in the sunshine.

Two of the runners collided with a girl in the shade. They knocked her flying and sped off. She got up awkwardly and straightened her school dress. Leaves tangled in her white blonde hair. Unshed tears bulged from large grey eyes. She brought her palms up close and picked gravel out of them. All the while, she held her long fingers tight together.

Blood trickled from her knee towards her sock. Mattie pulled a handkerchief out of his pocket and stepped forward.

‘Here – you can wipe your knee with this.’

She took the handkerchief with her fingertips and gave a shy smile.

Tommy dragged him away.

‘You don’t want to be messing about with her sort.’

His voice was urgent.

‘She got what was coming, trust me. Ask anybody from our end.’

Tommy snatched the hanky away and steered Mattie away to a group of lads lounging by the school wall.

There were smiles and names and talk about fishing – and then the bell to line-up went. He hung back behind Tommy. He couldn’t see the girl. A bit of oh-look-there’s-a-new-lad pointing didn’t last long. A cloakroom is a cloakroom and Assembly was the same.

A teacher with her hair in a grey bun came for his line. Tommy went off in a small group somewhere else. Mattie was last into the classroom. The teacher stood by the door, thrust an exercise book into his hand, then took hold of his shoulders.

‘I shall be back soon, children. I will expect your English exercise books to be ready and waiting upon my return. I know I can trust you to look after Matthew here, who is new to Scoresby.’

They turned and looked at him warily.

‘He is staying with his grandmother – on the Nab.’

A few heads nodded. Some kids smiled. Then she left.

Pairs of wooden desks stood in rows: the newest ones near a tall pointed window that overlooked Hob Wyke beach. Old scarred desks huddled by battered cupboards in the dingy back corner. Children with holes in their jumpers sat at them.

He hesitated. The children in the better desks smiled at him. The others kept their faces forward and copied the date on the blackboard.

One of the lads by the window spoke.

He patted the lid on a pair of desks nearby.

‘They’re both free,’ he said, ‘And I’d get the date down sharpish – McCutcheon’s a strict un, Matthew.

He found out names and organised his school things and labelled his exercise book. He tried to copy the date neatly. Mrs McCutcheon returned with a textbook and his schooling at Scoresby Nab began.

At playtime, Mattie looked for Tommy in bright sunshine. Two older girls basked on a wall. The one with glossy brown hair nudged her mousey friend.

‘Peeurgh – do you smell summat fishy?’ her harsh voice asked the whole playground.

The mousey one cottoned on.

Both heads turned. The girl with the white blonde hair walked towards the shade. Her arms crossed her chest, hiding her fingers. She held her head up but her chin puckered and she blinked a lot. She rounded the corner and the two girls sniggered.

Mattie knew how she felt. He wanted to run after her, to tell her they were just mean and she wasn’t to take any notice.

He waited too long.

They grinned and gathered round him.

Tommy pulled three gipsy pegs out of one coat pocket and an old tennis ball from another.

‘That’ll do.’ Mattie took the pegs. The lads nodded so he set up the game. He threw himself into it.

The tankle- tankle of a hand-bell stopped play. They lined up and Tommy went to a prefab. The girl with the white blonde hair crept into school last. Mattie turned to give her a smile but she bent her head too low.

4 thoughts on “The Secret of Scoresby Nab 16”