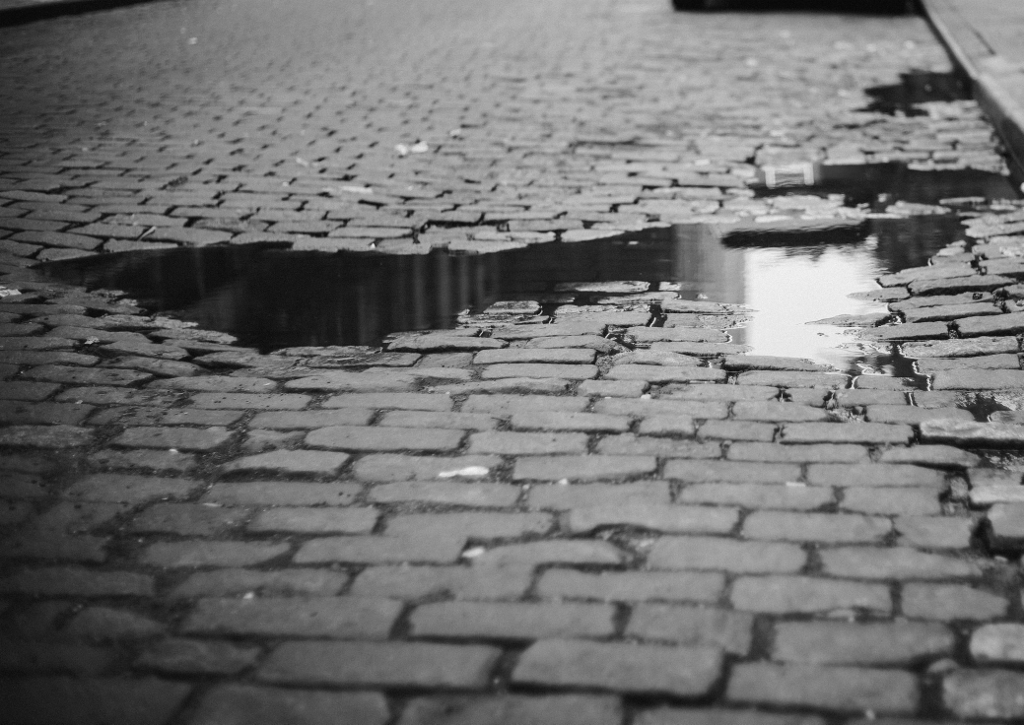 This is a tale told by rainwater rippling between setts and written in condensation on a bus window . . .

Monday morning. Except for a few sparrows outside and far-off traffic, Mrs Harrop’s kitchen was quiet. A fancy brand new bag sprawled across the breakfast table. Mattie leant his book against it. He picked up a packet of value cereal and tipped it into his bowl without looking. He poured milk in, spooned up a bit of stodge, and then let it drop back in the bowl. Blackbeard’s ghost had all his attention.
spaceMrs Harrop came in.
space‘Have you not finished that yet, Mattie Henshaw? Get a move on Your Dad’s away to Doncaster and I’ll not have you late for school.’
She whipped the bowl away.
space‘But-.’
space‘But what?’
space‘I han’t finished.’
space‘No time for that now.’
He pulled a piece of paper out of the book
space‘Please, Mrs Harrop, can you sign my note? Dad forgot.’
Mrs Harrop shook her head and shooed him away from the table. She picked the cereal packet up. He stood in her way, holding out the excuse note.
space‘Get out from under my feet,’ she said.
space‘Please, Mrs Harrop.’
She snatched the piece of paper. Footsteps clattered down the stairs.
space‘That’ll be our Sherida. She’s ready, proper ready for school – unlike some.’
He looked at Mrs Harrop, but her face was closed off. Sherida came in and Mrs Harrop presented her with the bag.
space‘I thought you could do with this, love. I’ve put one of Horstmann’s fancies in for playtime and there’s the new Bunty an all.’
She gave Sherida a kiss. He turned away.
space‘Thanks, Mam.’
Sherida put her shoes on by the front door.
space‘Ah, lovely,’ Mrs Harrop said and held the door open.
He ducked under her arm.
space‘But when do I get that note signed? I need it for today.’
space‘When Nelson gets his eye back. Now push off.’
She flicked her hands at him. He moved away and Sherida danced past, smirking. She skipped off down the road, then turned to wave. Mrs Harrop waved back. He ignored the pair of them and crossed the road.

At school, Mattie had to wait on a chair right outside the Headmaster’s Office. The plastic edge cut into the back of his knees. One move and the seat came up with a plap. The secretary frowned. He looked down at his shoes. He’d like to swing his feet, but he’d best stay still. If he wiggled his hands under his legs, the chair didn’t hurt so much.
spaceA dinner-lady rattled past with a trolley. She paused, and he tucked his feet in. He glanced upwards. She shook her head, tutted, then gave him a half smile. He made a rueful face back, and she trundled away.Light flashed on the secretary’s desk. She carried on writing as she spoke.
space‘The Headmaster will see you now.’
He stood up and gave his hands a quick rub on his jumper. The round brass doorknob felt slippery in his grasp. He held on tighter and turned it. The heavy door swung open. He shut it behind him and then stood in front of the Headmaster’s desk.
spaceA few soft thump-thumps came from the bottom of a bay window. A Cocker Spaniel stretched and padded over towards him, tail wagging.
space‘Basket, girl.’
The dog backed off and curled up. Chief Sir took his half-moon glasses off, polished them on a handkerchief and set them down on his desk.
space‘Your reputation precedes you, Henshaw. You have something of a temper, I believe?’
space‘’Spose so, Sir.’
space‘And it is only your own clumsiness that prevented you from assaulting Paddick?’
space‘Yes, Sir. But he was bullying one of the little-uns, Sir. And he wrecked me coat.’
space‘Your concern for others does you credit, Henshaw, but violence is not the answer, is it?’
spaceThe Headmaster’s eyes stayed calm and blue and looking right at him. Mattie gazed over the dog basket and across the playing fields to think. He turned back to the kind, sad eyes.
space‘No, Sir. Sorry, Sir.’
space‘Fortunately for you, I do not follow my predecessor’s regimen.’
space‘Sir?’
space‘I don’t use the cane, Henshaw.’
spaceMattie would rather he did. The dog mouthed her basket.
space‘I accept that your repentance is genuine. Therefore, I will not write to your father on this occasion. You will not, however, take part in the concert. I cannot have my staff drenched.’
spaceThe dog looked up.
space‘Do you understand?’
space‘Yes, Sir. Thank you, Sir.’
Chief Sir wrote something down and waved him away. Mattie set his hand to the doorknob.
space‘Oh, and Matthew,’ Chief Sir’s voice was quiet, ‘Don’t let me have to deal with you again, for your father’s sake.’

That afternoon, Mattie arrived late at the bus stop. Hail clattered on the roof of the 484 like machine gun fire, and the double-decker pulled away. He leapt onto the platform and clutched the grab-pole. Dirty rainwater splattered his legs.The conductor tapped the ‘Licensed for 21 Standees’ notice.
space‘Can’t any of you lads read?’
spaceYou’re not going to push me off, Matt thought, but said nought. The conductor punched his return ticket. He stood and dripped. The bus emptied in little gushes and, after a few stops, he found a seat upstairs next to Robbo. They didn’t talk. Rain fell.
spaceAt Lidgett Avenue, Robbo reached up and touched the strip on the ceiling. A ting sounded, and the bus slowed down. Mattie shifted to let Robbo past. The engine rumbled, the bus pulled out from the stop waiting for a gap in the traffic. Robbo stood on the gleaming pavement. The clouds blew away and the top deck warmed up like a greenhouse.
spaceSunlight snagged on something long and shiny: the zip on Robbo’s pencil case, still on the seat. Mattie snatched it up and banged on the window. Robbo looked up, puzzled. Mattie wiped the condensation off and waved the pencil case about. Robbo caught on. Mattie stood on his tiptoes and slid it through the narrow top window. Robbo held his hands splayed and Mattie let go. Robbo caught it. His lips said ‘Ta’.
spaceThe bus rolled on and the sign for Henderson’s Corner Shop came into view. Mattie picked up his bag and rang the bell. With a swing off the handrail, he bounded down the stairs. He threaded his way through a jungle of damp macs and reached the platform. A girl in a pink hooded raincoat and a hulking great lad stood with their backs to him. The bus slowed down. The girl turned round and blonde curls sprung out from her hood.
space‘Oh, look who’s here,’ Sherida said, ‘Weren’t you and your mates expecting him at the Rec, Barry?’
spaceBarry turned round. He put his beefy hand round the grab-pole.
space‘Yeah. You won’t be wanting to get off at this stop – Mattie.’
The bus stopped. Barry lifted his arm up and Sherida slid past. She opened her umbrella and skipped off on to the kerb. She sneered at Mattie.
space‘See yer, wouldn’t want to be yer.’
spaceMattie made to leave the bus. Barry blocked the way. The bell rang, and the bus lurched off down the road towards the Coronation Recreation Ground.
spaceBarry moved in a bit, away from the wet, and the road hissed by. Two women nearby had a loud chat. Water dripped off their plastic rain-hoods. One was a dinner-lady. Mattie shrank out of the way. Movements and scuse-mes rippled down the aisle. Barry’s gang grouped round the platform and Mattie turned to look for an escape route. Barry smirked.
spaceThe dinner-lady moved beside them.
space‘What’s going on? Don’t see you lot on here so oft.’
She stared at Mattie.
space‘Han’t you missed your stop? I thought you were on Inkerman Terrace.’
Mattie opened his mouth, but he got a sharp dig in the ribs. Barry pushed his hood right over his head and held it there.
space‘He’s wi us – we’re off laiking together,’ Barry said, ‘We’re meeting up wi us pals at the Rec.’
space‘You lads have sawdust for brains. It keeps siling down, you’ll get soaked.’
spaceThe bus slowed down. Mattie pushed his hood up. The wheels passed through a flood, threw up a grey wing of water and stopped. Barry shoved him into the oily pool and the gang jumped across. They waved at the dinner-lady and Barry put his arm over Mattie’s shoulder. They could have been best friends.
spaceMattie knew what was coming. He had get his blow in first. His knuckles jarred against Barry’s face. The dinner-lady called from the bus.
space‘Hey! No need for that. He only messed about wi your hood.’
Barry held his bloodied cheek and his gang stood back, shocked. Mattie made a run for it.

Header image adapted from photo by Josh Wilburne on Unsplash

4 thoughts on “The Secret of Scoresby Nab 6”