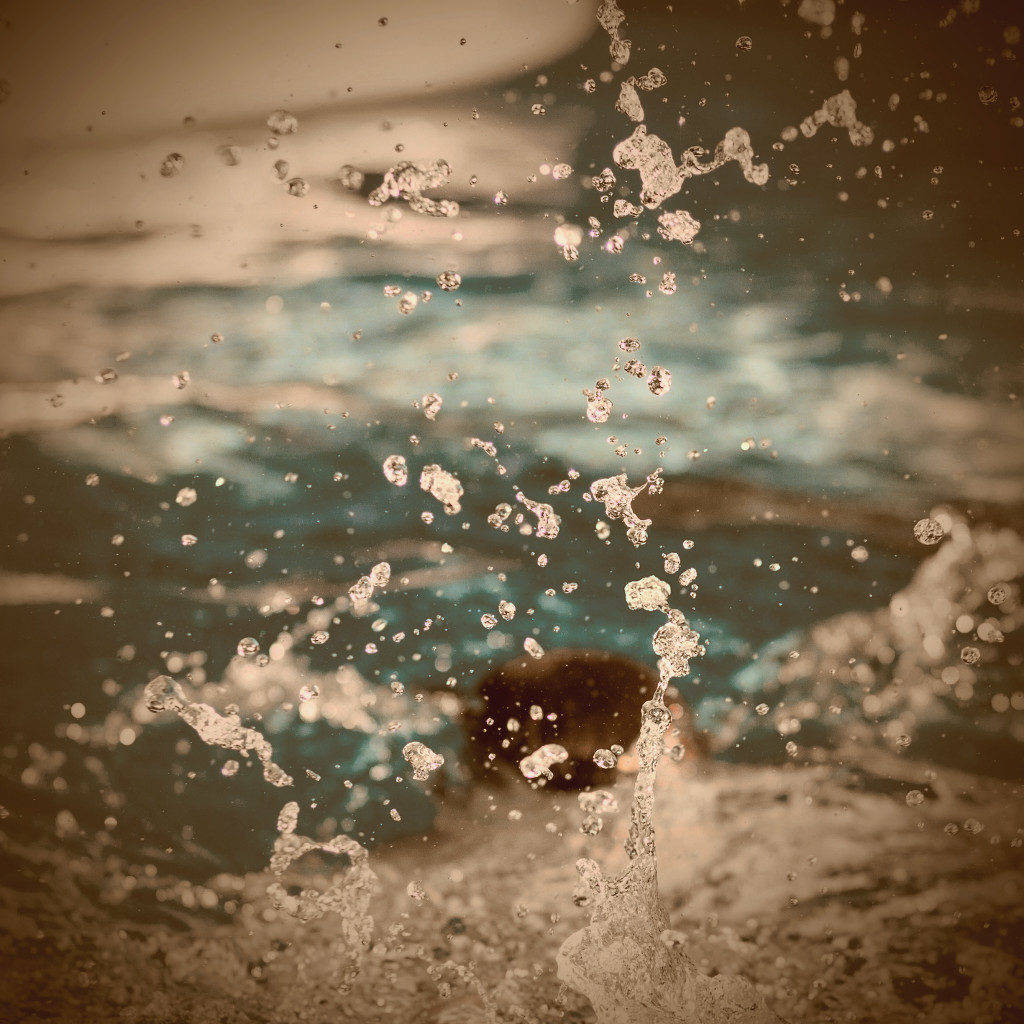 This a tale told in rippling lines of light over tiles and falling drops of water . . .

Wednesday afternoon a week later. Complaints bounced round the concrete hangar of Earnshaw Lane Swimming Baths. Lasses in one-piece swimming costumes sniffed at the chlorine. They crammed on one bench wrapped in towels. Their swim-hats bunched together like white lily buds.
spaceSherida sashayed across the tiles in a fuchsia pink bikini, toenails to match and a swim-hat studded with Technicolor flowers. She carried a huge fluffy towel. The other girls shuffled up, she sat down and they chatted.
spaceSlap slap. Bare feet crossed the tiling. Sherida nudged her neighbour. The entire bench gazed over the pool. Boys paraded by in skinny trunks with towels around their hips or rolled across their shoulders. They sat at the opposite side and talked, definitely not looking at the lasses.
spaceMr Aycliffe arrived in a tracksuit, with a whistle round his neck, and carrying a clipboard. The noise quietened. The children raised hands as he called out.
space‘Asquith
spaceBrandon
spaceCarter
spaceCartwright
spaceHarrop,
spaceHenshaw.’
spaceHis voice grew louder.
space‘Henshaw – where’s Henshaw?’
spaceThe children shook their heads.Mr Aycliffe headed towards the footbaths.
spaceMattie crept in from the other side. He wore a baggy costume, a white hat and white verruca socks. His towel dangled, small and dingy.
space‘There he is, Sir,’ Sherida called out and pointed.
spaceBoth lads and lasses spread out till there was no seating left. He hunched on an empty bench, shrinking into the slats. Mr Aycliffe turned, chucked up his chin in a way that said ‘typical’ and then ticked his list.

After the lesson, the children fidgeted and shivered in their towels. All except Mattie. He sat still, watching the water settle.
space‘Well, class, we’ve got through that quick-sticks. We’ve some free time left.’
spaceMr Aycliffe tapped his biro-on-a-string against the clipboard.‘What’ll it be -free swimming or diving?’
space‘Dive, dive, dive!’ the children shouted in chorus. Kieran nudged Barry, and they shared a smile.
space‘I get the message.’ Mr Aycliffe gave a quick grin. ‘Right. Stay on your bench until I tell you to line up.’
spaceHe headed down to the deep end.
spaceThe lasses elbowed each other and whispered and pointed. Sherida wandered up to Mr Aycliffe, put on her best smile, and waited till she had his full attention. Mattie couldn’t tell what she said over the echoes. Sherida returned to her bench, and the others clustered round their queen bee.
space‘Heard about that kid the other day?’ Kieran said, loud enough for the lasses to overhear.
space‘What about him?’ Barry took up his cue.
space‘Tried diving off top board.’
space‘So what?’
spaceKieran paused. He checked he’d got everybody’s attention.
space‘Got it all wrong and cracked his head open. Blood everywhere. They had to drain the pool –there were little bits of his brain in the filter.’
space‘Eeeurgh.’ Barry mimed being sick.The lasses held their cheeks or put their hands over their mouths.
spaceMechanical squealing interrupted the fuss from the deep end. Mr Aycliffe winched out the springboard. Some lasses made little claps close to their ribs and smiled at each other.
space‘OK – line up here. No running.’
spaceThe children formed a queue.Mr Aycliffe put his hand in front of the chest of the first boy.
space‘Ladies first.’
space‘Aw, Sir, that’s not fair.’
spaceThe lasses made a line with Sherida at the front. Mr Aycliffe nodded, and she took up her stance on the board. She waited for quiet, then ran, bounced and made a dive with hardly a splash. She came up to the edge with a gracious smile for Mr Aycliffe.
space‘Beautifully executed, Miss Harrop. Bravo.’
spaceLads flapped their hands at lasses to get a move on. Lasses stuck their tongues out behind Mr Aycliffe’s back. Some dived off the side. Some walked off the end of the board like a pirate’s plank, holding their noses. Robbo did a neat back flip. One lad with a belly like a pantomime genie followed him. He ran, jumped, and pulled his legs up to his chest. The water came up in giant plumes and splattered everybody. Lads grinned and lasses scowled.
spaceMr Aycliffe blew his whistle. The screech reverberated around the concrete ribs, and most covered their ears.
space‘Brandon – what did I say about bombing? Sit out – there.’
spaceThe lad flumped down on the end of Mattie’s bench. He turned his back and glowered as everybody else had another go.
spaceOver on the lads’ bench, Kieran gave Barry a poke. Barry stood up and marched over to Mr Aycliffe.
space‘Please, Sir, can we go off the fixed boards now?’
spaceMr Aycliffe looked at a giant clock on the balcony. He nodded.
space‘There’s enough time.’
Mr Aycliffe checked down the list. Barry looked over his arm and gave Kieran the thumbs up. Kieran grinned back.Mr Aycliffe spoke to himself.
space‘No reason why not. This group’s all competent swimmers. Even Henshaw, apparently.’
spaceHe turned to the class.
space‘I shall just be a moment.’
spaceMr Aycliffe went to the deep end. He started organising a rope with floats on it like a giant buoyant necklace.
spaceSherida crept over.
space‘I dare you.’
spaceMattie refused to meet Sherida’s eye.
spaceAnother lass came.
space‘I double dare you.’
spaceMore lasses hovered and buzzed.
space‘Cowardy cowardy custard…’they began.
spaceSherida pointed.
space‘Sir’s coming.’
spaceThe lasses dashed back to their bench before Mr Aycliffe returned.
space‘Now then, Class. One at a time and no pushing-in. Mixed, this time. Follow the rope to the left when you come out. Yes, you can have a go too, Brandon, if you can behave this time.’

The handrails were smooth and shiny. Mattie breathed in steady and slow, steady and slow right up to the top board. He waited while the sound stopped bouncing off the skylights. He looked down. The water settled into a wobbly tartan. Faces looked up at him like rows of eggs.
spaceHis dinner curdled in his guts, but he made himself look forward. The board lay bleached and dry: he was first. He walked out to the end, head up, then stood still. The non-slip edge pressed into the balls of his feet. His long toes curled over the tip and strained against the verruca socks.
spaceHe shut his eyes. His mind filled with a dream of wide, open sea; its welcoming briny smell, not this dead chlorine. He raised his body toward the weak sun. Arms stretched, he could all but touch the skylight. He pressed his arms against his ears, palms together in prayer. His knees rubbed each other, knobbly and eager. He launched forward, a dart falling through the air. It worked for sea-birds.
spaceA moment of pure freedom.
spaceHe parted the water, and the fizz giggled in his head. He curved upwards, away from the bottom; bubbles popping and streaming behind. The water stroked his back. He slid past a grille patched with used plasters, rusting hair bobbles and bits torn off swimming caps, through the pale shallows and right up to the tiled steps of the shallow end.
spaceHe hauled himself out. They were all looking at him. Their glances felt like so much water dripping off. A tremor of joy inside set his smile free. He sat up straight on the edge of the pool and the baths fell oddly quiet.
space‘Out you come, lad. I suppose you didn’t know the top board was out-of-bounds?’
spaceMattie stood and then stared down at the drainage channel.
space‘No, Sir.’
spaceMr Aycliffe wrote something on his clipboard.
space‘No harm done, lad. You’ve been hiding your light under a bushel all this time. A grand dive, Henshaw.’
spaceMr Aycliffe clapped, and a few lads joined in. Across the pool, Sherida’s painted toenails flashed. She kicked the bench and the girls’ feet started off towards the changing rooms. Mattie went to his empty bench and picked up his towel. He looked round. All the other children had gone.

Over the next few weeks, Mattie dreaded Wednesdays less and less. He managed the verruca socks well enough, and he enjoyed the challenges Mr Aycliffe set him. The pool welcomed him.
spaceOne Saturday afternoon, the rain was chucking it down. Dad pushed his tea aside and drew a small pile of damp post towards him. He started opening it. The cellophane window of a brown envelope crunkled.
spaceIt looked official. Was it from school? Mattie tried not to think about it and turned back to his Jules Verne from the library.Dad’s sudden voice sounded sharp.
space‘What’s this about a gala?’
space‘What, Dad?’
space‘It says here you’re in a swimming gala, July 11th. What have I always told you? Keep away from water.’
spaceHe crumpled up the empty envelope and threw it in the coal scuttle.
space‘But I’ve done well at swimming – Mr Aycliffe says I’ve got talent.’
spaceDad stood up. His huge hand flattened the letter against the table.
space‘So you’ve been off to the baths already – gone behind my back?’
spaceMattie’s voice rose over the teeming rain.
space‘I thought you’d be pleased. I thought you’d be glad that I can swim – that I won’t drown like my mam.’
spaceDad took a deep, harsh breath. He looked away and picked up his log-sheets. The letter drifted down to the floor. He murmured towards the window.
space‘Your mam didn’t drown.’
spaceHe gazed through the glass then strode out of the house straight into the downpour.

Header image adapted by K. M. Lockwood from a photo by Lavi Perchik on Unsplash

8 thoughts on “The Secret of Scoresby Nab 8”