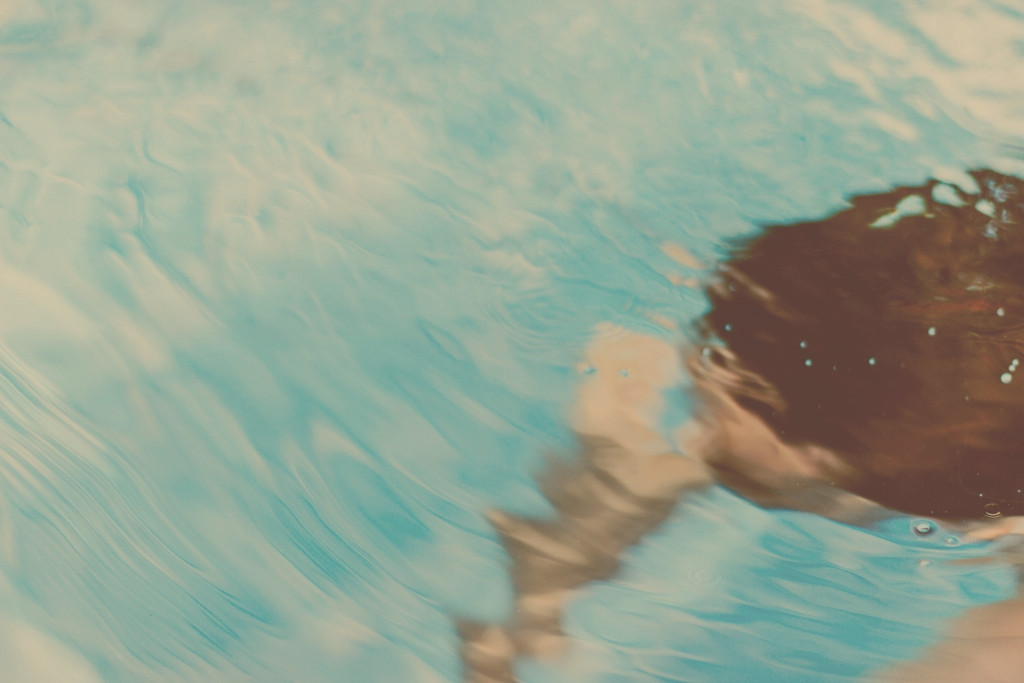 This part of the tale is told by the shadows of swimmers darting across tiles . . .

On Gala day, the Lawefield lads huddled on one tiny bench at the Baths. Mattie sat on the end. The team from St Thomas More and their matching swimming caps got an inspection.

space‘Robbo’s gotta be in wi a chance.’

spaceThe whistle blew. They shut up. The Deputy Mayor started his speech. He was a big man, given to huffing and puffing.

space‘He never has been before.’

space‘Left back in the changing room,’ Barry finished. They laughed. Mr Aycliffe glared. Mattie stared at his latex socks. He tucked his feet further under the bench.

space‘Ladies and Gentlemen, boys and girls,’ the Deputy Mayor said through his megaphone.‘If you look at your programmes, you’ll see a new event. This year we’re introducing an underwater swimming competition. Please turn your attention to the deep end.’

spaceMr Aycliffe gave Mattie a nod. A teacher that Mattie didn’t know spaced the four swimmers out and explained the rules.

spaceMattie tipped forward. He entered the cool, deep water, eyes shut. In his mind, he passed silver-grey boulders, knobbly strands of bladder wrack, and scuttling crabs. His nostrils shut out the chlorinated water. A quick touch of the tiles, he flipped over and launched back. He glanced across the lanes. A girl matched him pace for pace. He shouldn’t have looked. It made his eyes smart. He shut them and swam on. He felt the water, felt one swimmer left beside him.

spaceAbove the pool, the Deputy Mayor gave a running commentary.

space‘It’s neck and neck. Whose time will be the longest, Rosalind Bennett of St Thomas More’s or Matthew Henshaw of Lawefield? I don’t know about you, boys and girls, but I couldn’t hold my breath that long sitting, never mind swim as well.’

space‘Remember, these points go towards the final score. You never know – this could be the decider.’

spaceIn the pool, below all the fuss, Mattie sensed someone the surface. The water stilled. He was alone. He swam on for the sheer joy of it, twisting and barrel-rolling for fun. He didn’t want to get out, but thought he better had. Dad might be there.

spaceHe climbed out to silence. Some faces looked worried. Had something happened to one of the others? He looked round. Mrs Briggs held a towel across the girl’s shoulders. They heaved. He hoped she was alright.

space‘Well, that was a fine effort by Matthew Henshaw giving five points to Lawefield. Rosalind has gained three for St Thomas More’s…’

spaceApplause took off round the baths like a flock of pigeons. Robbo clapped him on the back .He looked him up and down.

space‘Ay – Marine Boy, where d’you keep your secret stash of Oxy-gum then?’

spaceMattie laughed. Back to the benches, Robbo left him a space. They watched the relays together. After the seventh, Mattie jerked his head towards the list of races.

spaceHe nodded and wrapped his towel tighter round his shoulders. ‘How come you’re not shivering? I’m perished.’

spaceAn announcement mumbled ‘the last race – a relay.’ In a flash of brilliant pink, Sherida collected some lasses and led them to the changing rooms. The baths fell quiet. Even the water stilled, reflecting afternoon sunshine in shifting blocks of glare.

spaceRobbo stirred. He rolled up his towel and laid it on the bench.

spaceRobbo turned with a smile. He slipped, his foot shot out from under him, and he landed on his arm. It gave a horrible crack. Robbo pushed himself up on the other elbow. His face shone white.

spaceMattie stepped forward to help. Slimy tiles slithered under his feet. His arms flailed, but he stayed upright. Robbo moaned. Mattie leant down to pull him up with one arm. He was too heavy. His arms met round Robbo’s chest, and he heaved.

space‘Will you give it a go?’ he asked.

spaceMattie nodded. Mr Aycliffe steered him towards the deep end, then went off and spoke to the Deputy Mayor. The megaphone buzzed.

space‘Due to an unfortunate injury, we have a change to the advertised programme; Matthew Henshaw will be standing in for Robert Asquith.’

spaceA few claps fluttered round the baths, and a few moans.

spaceThe whistle shrilled. The first Lawefield swimmer, a plump girl from 5b, messed up her entry. Mattie willed her to catch up. She touched the toe of her teammate last. He splashed down the pool like a wind-up bath toy. No chance.

spaceTeachers prowled and pushed the air down with their hands, signalling their pupils to sit still. Everyone half squatted and stood up as soon as the teachers’ backs were turned. The Deputy Mayor glared, then coughed into the megaphone. Everyone sat.

spaceThe little torpedo from 5a stormed up the pool. Every time his face came up, it glowed redder. Mattie glanced across the pool. Robbo gave a thumbs-up from under a blanket.

spaceTwo swimmers from the other teams started the last leg together. The St Thomas More’s champion stormed away next. Mattie stood at the edge, poised to dive. The boy from 5a tagged him, and he was last in.

spaceHe split the water in front of him. He pulled on its strength, slid his hands inside and twisted his way forward. He caught up with the swimmer in third place, and the cheer made his ears ring.

spaceJust beyond the halfway line, he passed another. More noise. Only one to beat.

spaceEach snatched breath scoured down his throat. Each stroke tore at his arms. Each kick burnt his legs. He felt his toes twist in cramp and stitch grasp the side of his ribs. The water grew paler, shallower.

spaceThe whistle blew. He was second. The Lawefield side slumped and fell quiet. He pulled himself out of the deep end and dripped back to the bench. He leant down and pulled his verruca socks straight. Chlorine made his eyes and nose run.

spaceThere was a whine of feedback. Everyone looked up.

space‘Ladies and gentlemen, boys and girls, as a special treat this year; the Melthwaite Mermaids Synchronised Swimming team will entertain us with their Hawaiian Water Ballet while our judges compile the final scores.’

spaceHe paused and then nodded at Sherida under the balcony. A line of identical girls wearing nose-clips followed her.

spaceMattie dried himself. He filled his mind with sea till the twangy music stopped.

spaceThen the Deputy Mayor got hold of the megaphone.

space‘In reverse order,’ he paused like the compere off Miss World, ‘in fourth place with 256 points – Netherwoood Grange.’

spaceHe waited for the applause to stop.

space‘Now ladies and gentlemen, boys and girls, it has been a really close competition all the way through, I’m sure my fellow judges will attest.’

spaceHe turned to the men sat at the Judge’s Table. They nodded.

spaceJust get on with it.

space‘This has proved to be a thrilling contest, I’m sure you’ll all agree. We’ve added the totals up three times, and it came down to just one point between the top two teams.’

spaceSomething flashed up on the balcony. Mrs Harrop, renewing her lipstick in a mirror. Not Dad.

spaceThe Deputy Mayor waited for the hubbub to die down.

space‘Which leaves me only to congratulate Lawefield Middle for their magnificent score of 270. Could the team captain please come and claim the cup?’

spaceMr Aycliffe and a St John’s Ambulance man helped Robbo to the desk. His arm was in a sling and he couldn’t hold the cup up. He leaned on the table and beckoned. Mattie fidgeted in his seat. He didn’t want a scene.

space‘So it was that little beggar that won them the cup?’

space‘There’s summat odd about him – summat wrong about his feet.’

spaceA group of shadows fell across the tiles. He glanced round. Kids from another school nudged each other. Somebody ripped the latex away from his foot and a harsh spotlight fell on his toes.

spaceHe rushed to cover them with his hands, and his towel fell on the floor. He clung onto the remaining verruca sock and twisted round.

space‘Gerroff. Leave us alone, will you?’

space‘Euurghh. Get a load of that manky effort. He’s got webs.’

spaceThe seats all around him creaked. Adult voices joined in.

space‘Like a frog’s. They’re enough to make you reach!’

space‘Have you clapped eyes on the lad’s toes? They’re all stretched out like laggy band. I make no wonder he can swim like that.’

spaceMattie let go of his bare foot and hid it under himself. Kids snatched at him. He used both hands to hide his other foot and looked for an escape. In every direction, mouths sneered and fingers pointed.

spaceA gap appeared in the wall of accusing faces. Angry parents stood clustered round the judges, arguing. Mattie caught Robbo’s eye. The words he wanted to say formed in his head. He hadn’t cheated – he couldn’t help his feet, could he?

10 thoughts on “The Secret of Scoresby Nab 9”