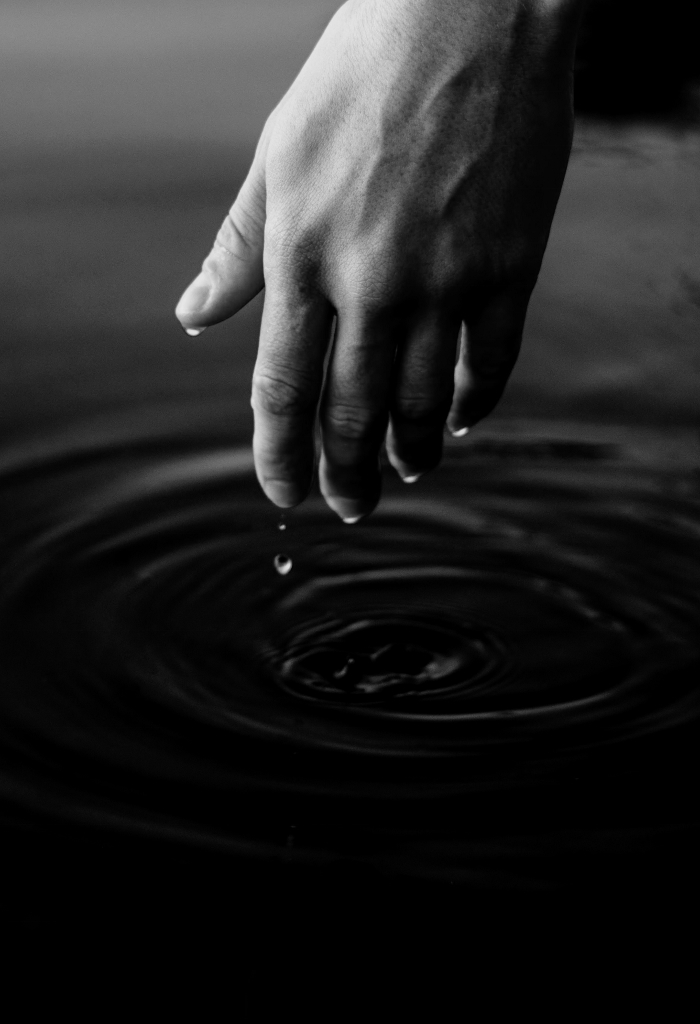 This part of the tale is told in fallen willow leaves spinning on a half-forgotten river . . .

Barry soon gave up the chase. Mattie watched him through the grey metal stakes of the Ladythorpe Estate electricity substation. He knew lots of ginnels, shortcuts, and places to hide. Fat spots of rain fell. Barry and the gang disappeared into the Co-op.
spaceHe pushed his way along a grimy hedge of spotted laurel. It led to a rotten billboard on the railway bridge. He ducked down and found a line of jutting stones. Their familiar shapes guided him through the darkness and alongside the Cut. The headroom shrank. An old canal bridge arched over him, its bricks slimy with drips and seeping industrial waste. He did his usual limbo and reached round for a handhold. A strip of grotty mortar fell off and landed with a plop. Things swam away in the dark. Other things rustled.
spaceHe came out at the back of Britannia Mills by a small shore where once cattle drovers brought their herds to drink. Nobody there now. Not even an angler. Just peace. His feet took themselves along the towpath. His head thrummed. A moorhen took off in a rush of flapping alongside Neckholme Island. Mattie stopped. He needed somewhere to think. After a short run-up, he leapt over the channel between the island and the banking.
spaceHe hunkered down, safe behind tall rosebay willowherb. Down on the riverbed, long weeds swayed like green hair. He leant over, placed his fingers in the flow and touched the force running beside the island. With his eyes shut, he breathed in the water smell. The palm of his hand slid down into the river, sidling round in the buffeting current.
spaceSomething took hold of his hand. It felt like soft marble. He glanced down. It was just his reflection, but the fingers were flexible ice. He pulled his hand back a little. Weight hung from it – and a hand made of thickened water. Mattie looked into the wavering stream. His chin didn’t have a point like that, he didn’t have long hair, nor tattoos. It wasn’t his reflection.
spaceHe sat back on his heels. The watery hand fell back with a splash. Ignoring the shudder that twisted his shoulders, he leaned forward again.
spaceIt was still there.
spaceThe water-boy-fish-thing drifted up to the surface. Mattie’s eyes took in every detail. His brain yelled this is uncanny, get away, you’re going mad.
spaceThe water boy’s teeth glinted. He smiled. Mattie’s lips moved to match. With a quick suck of breath, he clapped his hand over his mouth. He had to get off the island.
spaceIt only took a little jump. See, everything was normal. No water creatures, just chimneys and factories. Same old Lawefield. But his memory said something different.

At break the next day, Mattie sat on a step by the boiler room and tried to read. A breeze picked up a chocolate wrapper and whirled it round by his feet. He picked it up and put it in a bin. Mrs Briggs, the class teacher, wandered round, looking for something or someone. She pushed back the hood on her coat and walked over. He had nowhere left to go
space‘I thought I might find you hiding here.’
space‘Yes, Mrs Briggs.’
space‘Why all the excuses, Matthew? The others go without a fuss. You never know, you might enjoy it.’
spaceHe picked up another piece of litter and threw it in the bin.
space‘Well, I shall expect to see you on the coach with all the correct kit.’
space‘But Mrs Briggs, I can’t.
space‘Now there’s no such word as can’t. Why ever not?
space‘I’ve got verrucas. You shouldn’t go if you’ve got verrucas, should you? Mrs Harrop says it’s mean to smittle other people with verrucas.
space‘Is that all it is, Matthew?’
She tucked a loose strand of hair behind her ear, and bent down a little.He hated it when grown-ups did that. He might be small for his age but he weren’t stunted, nor stupid.
space‘We can soon sort that out. You see, Matthew, there are socks you can get from the chemist – made from latex. They stop the verrucas spreading – so you’ll have nothing to worry about. You won’t infect anybody.’
His voice came out quiet.
space‘Are they very expensive, Mrs Briggs?’
space‘I don’t expect so, Matthew.’
spaceShe looked at Dad’s attempt at a darn in his jumper.
space‘Look, there’s a chemist’s near me. I could get you some and your Dad could pay me later. What do you say to that?’
spaceHe didn’t have a right lot of choice.
space‘That’s kind of you, Mrs Briggs.’
space‘Good. Now we’ve sorted that out, I want you to go and play with the other children. You really must try to make friends.’
spaceShe straightened up, patted her hair back into place and walked away. He looked across the schoolyard, then stayed right where he was.

At the end of last lesson, Mattie lifted his chair on top of his desk. He lined up the legs so it wouldn’t fall off, then turned towards the cloakroom. The teacher’s voice rang clear above the scraping and chatter.
space‘Can I speak to you a moment, Matthew?’
spaceHe thought about pretending not to hear her.
space‘Yes, Mrs Briggs. Will it be long? Dad’s only got Rotherham today, so he might be back for tea.’
space‘I promise not to keep you.’ She smiled and rummaged in a shoulder-bag. The other children left. Their noise shifted into the cloakroom. He brought his attention back to the front.
space‘There you go, Matthew. I said I’d get them. I don’t like anyone missing out.’
spaceShe held out a paper bag from the chemists in town. The verruca socks. Oh, no escape, then. Mattie took it and made a smile appear on his face.
space‘Thank you very much, Mrs Briggs. How much do we owe you?’
space‘Don’t you worry about that, Matthew. I’ll settle up with your father sooner or later.’
spaceMattie knew a white lie when he heard one.
space‘Oh, alright then, Mrs Briggs. Thank you.’

image adapted by K. M. Lockwood from original by Roman Voronin on Unsplash

6 thoughts on “The Secret of Scoresby Nab 7”