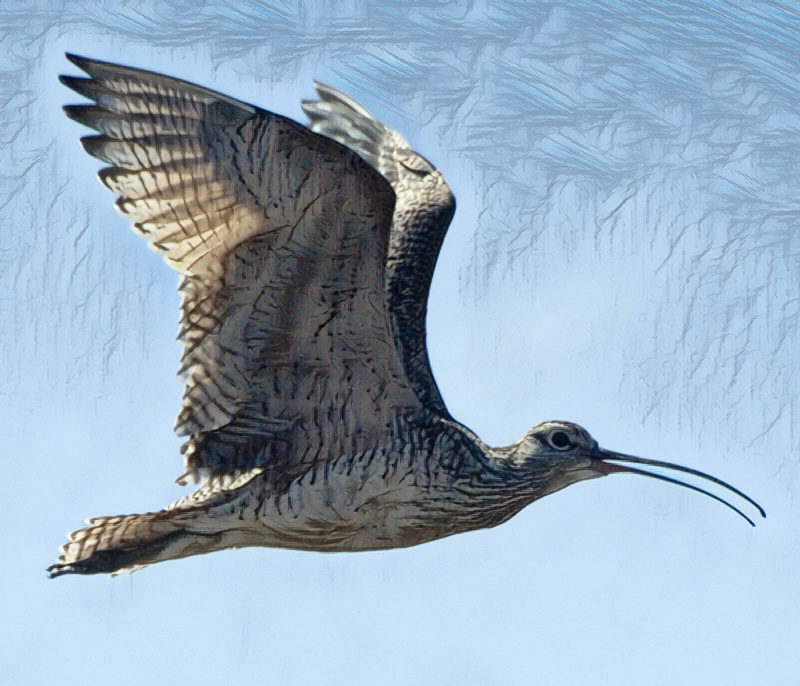 This is part of the tale is told by the bubbling song of a curlew, scribbled over briny air . . .

Dad turned and walked without a word towards the lock gates. He entered a narrow ginnel. Mattie sped up and came close. He slid his hand in Dad’s palm and Dad gave it a squeeze. At the streetlamp by the end of the ginnel, Dad let go and gave a slow, sad smile.

space‘I’ll call your grandmother, then will I?’

spaceWhen they got into Mrs Harrop’s, Dad headed straight for the phone. Mattie stood in the draughty hall and listened. His clothes hung cold and damp, but his heart burned with hope.

spaceA long pause followed Dad asking if Mattie could come stay. He couldn’t hear the voice on the other end.

space‘Aye, I’m sure,’ Dad said and he fell quiet. More distant mumbling. ‘You’ll have to deal with it. If it happens.’

spaceIf what happened? If he got called names . . .

spaceDad fiddled with the curly cord. ‘It can’t be worse nor Lawefield.’

spaceDad flipped pages in his notebook.

space‘Tomorrow morning – I can bring him on from North Ardsley to the crossroads.’

spaceDad’s voice turned stern. ‘No. I said what I said then and I han’t changed my mind now. Haldane Cross – not one foot nearer.’

spaceDad set the receiver in its cradle. He dropped coins in the box by the phone and picked up his notebook. He concentrated on folding it up and fitting it in his trouser pocket. Mattie knew that shut-up face. He only dared ask practical things.

space‘Best get packing then,’ Dad said.

spaceMattie pulled the thin blanket over his chilly ear. Dad crossed to the window and drew the curtains.

space‘Shake a leg, lad – there’s no time for ligging.’

spacePale light and the chittering of sparrows came in. He flung back the covers and sat up. He was going to Scoresby. His feet landed on cold floorboards and he lifted them off sharpish. Soon his toes found the rug and dragged it close.

spaceDad left and Mattie dressed quickly. He checked the room; he wasn’t leaving a thing behind.

space‘Put your boots on – maybe boggy on the moor tops.’

spaceHe picked up the case and Mattie followed him outside. A lorry in the West Riding Haulage Company colours stood by the kerb. He shut the front door and looked up at the house. Nobody looked through the fancy curtains. Nobody waved goodbye. Why would they?

space‘What’ve you got in here? A dead body?’

space‘Just my books and that.’

spaceHe shook his head. Dad half-smiled, opened the cab door and lifted the suitcase in. Mattie clambered in after and Dad slammed the door. Piles of fuel receipts, Ministry of Transport paperwork and log sheets had to be moved to make space for his feet and his duffle bag. Dad hoicked himself up into the cab. He rested his hand on the wheel and turned to Mattie.

spaceThe roads were quiet. They drove past the gasometer on Commercial Road and out beyond the rhubarb fields. The soot-blackened buildings of Lawefield grew smaller in the wing mirrors.

spaceAfter a while, Dad pulled in at Goddard’s Transport Café. He took a mug off the dashboard, jumped out and disappeared into the tarred wooden shack. Mattie watched a magpie pull at something on the road. It kept yanking and tearing at the mashed creature, then dragging bloody strips backwards until they broke.

spaceDad came back with a package wrapped in grease-proof paper. Inside curled a bacon sandwich, gone cold.

spaceDad nodded and drove off. He switched the transistor radio on and fiddled with it to get a better signal. The music faded in and out as the road rose and fell over small rounded hills. Now and again, it switched from dual to single track and passed through market towns and farming villages. Mattie settled back into the cab. The hay-sweet country air blew the last of Lawefield away. Good riddance.

spaceOutside Leadcaster, the smell changed to tar. The radio hissed and a long row of traffic crawled in front. Cars moved in small batches and heat barged into the cab. He wound down his window. All the way along the queue, dogs’ heads and small children’s hands stuck out. At the end, a workman twisted a green and red lollipop sign.

spaceMattie leaned right out for a moment. A road-roller trundled past, flattening the new shiny black road surface. It made his chest rattle and his ears ring. Workmen followed, stripped to the waist and carrying watering cans striped black with tar. The sign changed and Dad drove on.

spaceTime pips sounded on the radio.

space‘I’m pushed for it now,’ Dad said. He drove the Bedford hard.

spaceMattie watched the line of The Cut threading through the flat plain, past Upper and Nether Marish. Its waters gleamed through waving barley. He counted swing bridges and humpty-back bridges and lift bridges. Then the canal swung north and out of view.

spaceWhat if he had gone with the water boy? Would they swim all this way to the sea?

spaceDad changed down. The lorry responded with a low grumble. Ahead, the road disappeared into the deep shadow of Haughton Bank.

spaceThe engine note changed, and the truck levelled out. They rounded a stand of tall Douglas Fir. His eyes shut against the glare and his nose tingled.

spaceHe could smell the sea.

spaceHis eyes stung, then adapted to the light. The moor tops lay ahead, broad and windswept. A large stone cross showed dark against moving clouds. Dad pulled off the road onto a flat expanse of sand. Mattie jumped out and pulled his suitcase and his duffle bag after him. The engine clicked and cooled.

spaceHe filled his lungs. A bird cried in the distance, sad and wild and beautiful all at once. He walked round to the driver-side and looked up. Dad didn’t get out. He wound the window right down and leaned out.

‘Looks like you missed your grandmother. Nay mind – it’s none so far.’

space‘I don’t which road to go. You never telled me.’

space‘The Scoresby trod’s a bit beyond Haldane Cross – you can’t miss it.’

‘The trod, the path.’ Dad waved his arm vaguely towards the east – and the hidden sea.

spaceDad pulled back into the cab.

space‘Not even walk me to the Cross?’

spaceDad’s eyes moved away and slid over to his watch. He frowned.

spaceHe started up the engine. ‘Be good for your grandmother,’ he shouted. The Bedford left in a cloud of choking dust.

7 thoughts on “The Secret of Scoresby Nab 11”