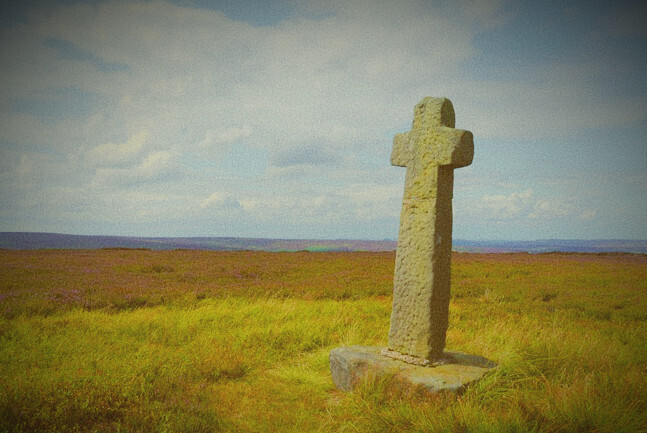 This is a tale told from moor to harbour, whispered over salt-pitted walls and stacked lobster creels . . .

The moor spread empty, wide and low under a blustery sky. Breezes swept through long strips of heather, whin and bilberry, shaking the bushes.They chased blotches of shadow and sun across small rises and dips to Haldane Cross.

spaceBeside the tall stone, Mattie breathed in honey and salt. He shut his eyes against the tough little winds and lifted his face to a changeable sun. A new start. The cry of a bird rippled again somewhere nearby. He blinked and shaded his gaze. Sandy tracks criss-crossed the moor like wakes across a rolling sea. He chose one and picked up his case. Up and down, he followed the trod to a bog.

spaceGreat stone slabs lay across sodden brown peat. He crunched across their gritty surface, skirting past tall clumps of reed. The broad sandstone ribs ended and a wide net of streams trickled ahead. He weighed up the best route and leapt from tussock to tussock. They wobbled and squelched. At a dry clough like a little dune, he took a breather. His arms ached like billy-o.

spaceA curlew rocketed away at eye level. It skimmed over the waving moor with its curved beak gaping, and its song bubbled with grief and joy. Mattie stood to watch till it disappeared over the brow of a rise, then turned back to the path. After a while, the trod petered out into a dell of bone-dry grasses.

spaceHe rustled through the dell then stopped with his foot in mid-air. He stepped back, then squatted down carefully with the case close by his side. He gently parted a clump of grass beside a small dip. Inside, four eggs sat point to point, neat as a lucky clover. They lay splotched like something from the Army Surplus, barely showing up against the plants. The mother curlew cried somewhere out of sight.

spaceHe kept low to the ground, watching and waiting. Wind made plants round him tremble and his back grew sweaty under his duffle bag. The curlew swooped down and rearranged the clutch with her long, thin beak.

spaceShe settled and dozed. When her eyes were closed, he crawled backwards to pick up his case. He scanned the ground for other nests and the thin trace of a path. At the far rim of the dell, he stood up straight.

spaceWind blasted his face with a slap of salt. The straps of his duffle bag thrummed and his boots flapped round his legs. The case banged against his knee. He set it down and moved his feet apart, then stood and gazed. Below lay a pile of orange roofs, stone chimneys and oddly shaped houses. Not one was the same height. Not one was built to the same pattern. They huddled into a great shoulder of rock and faced each other round a small bay.

spaceWarmth swelled up inside him. He knew this place. He knew stone-flagged paths led down to a harbour and that you could walk out for miles on the scaur when the tide was out. He knew there was a beck fell down to a beach in a waterfall and a cottage stood agin it. He knew he’d found Scoresby Nab.

spaceHe wiped the wind out of his eye and marched off downhill. The turf felt was springy beneath his boots. Sheep shifted out of his road and he soon reached a dry-stone wall. He found a step stile and climbed up. At the top, two slabs left a small gap to keep the sheep out of folks’ gardens. He stood for a moment, feet either side of the squeeze, case balanced on the topping stones. Time to go home. The tumble of warm pantiles and golden sandstone welcomed him, but he had no idea which was his grandmother’s house.

spaceFor hours, the twisting streets and snickets of Scoresby played tricks on him. Steps led up to gated backyards. Lanes cobbled with sea-rounded stones wound along, then ended in walls. On the other side, cliffs fell, dotted with sea thrift and bird-nests. Seals looked up at him from the bay far below.

spaceMattie found a road wide enough for one car to squeeze through and headed for the sea. Every so often, a line of thin stones divided the surface into wide, shallow steps. Little kids with buckets and spades jumped over them, and a young mother tipped her pram to get it uphill. Busy women with shopping baskets and hikers in red knee-socks passed up and down. Nobody minded him.

spaceBehind Weighell’s Family Butchers, a wall surrounded a tiny square of pocked grass. In the middle, a sheep tied to a stake bleated. Inside the shop, a hard-looking squarish man in a striped apron and a white hat served behind the counter. He stared at Mattie. His attention was not friendly. A gold watch on a chain fell out from behind his butcher’s apron and screaled across the glass countertop. Mattie winced and walked on rapidly.

spaceOutside Grime’s Fishmongers, tiles gleamed in passing sunshine. In the window, glass floats hung from old nets, glowing with rich colours. He drew closer. The biggest crab shell ever hung from the wall – the size of Desperate Dan’s cow pie.

space‘Mind out!’ a woman’s voice cried.

spaceMattie dodged out of the way. A  great sloosh of water splattered across the footpath and into the road. The reek of bleach filled his nose. Her tin pail clanked down, and the door slammed shut.

spaceDay trippers thronged the next shop, a newsagent’s. Its red-faced and harassed owner struggled to move. No point mithering her. He passed by a noisy wool-shop stuffed with old ladies, a tiny chemist’s bulging with screaming babies and expectant mums, and a dark betting shop with dire warnings by the door about being over 21.

spaceFurther down, a stall in front of Bedlington’s Greengrocers jutted right across the pavement. He checked for traffic and sidled round. Somebody had taken the trouble to stack apples and oranges in pyramids, hang hands of bananas from hooks so they all pointed the same way, and arrange punnets of strawberries and cherries like a chequerboard. His teeth watered.

spaceHe slid his case under the stall and dug round in his pockets. He found a few coppers. An elderly man came out, peered through his glasses at Mattie, and frowned.

space‘Can I help you, lad?’

space‘Please, sir, I wondered if you have anything for thruppence?’

spaceMr Bedlington tore down a small paper bag from a hook and felt round under propped-up baskets.

space‘You’re not from round here, are you, son?’

spaceHis eyes slid to the suitcase tucked under the stall.

spaceHe popped some misshapen fruit in the bag, took hold of the corners and twirled it with both hands. He handed it to Mattie: the corners stuck out like little ears.

space‘Mrs Henshaw. Course I do, lad. But I wouldn’t call her gran if I were you. Hang on a moment.’

spaceHe tore off another paper bag and took a pencil out of his overall. He talked Mattie through a sketch map of the route as he scribbled.

space‘Thanks – here’s what I owe.’

spaceHe held out his money.

spaceThe greengrocer shook his head. He placed the map on Mattie’s palm and folded his fingers over it. He held Mattie’s fist but spoke half to himself.

space‘I haven’t seen eyes that colour since … oh, you do have a look of her.’

space‘Now remember – up the ghaut – that’s an alley to you, lad. Then right past Jawbone Cottage and straight along the top of the Nab.’

spaceIt wasn’t till he reached the crossed whale bones that the thought came:

spaceHow did the greengrocer know he was a Henshaw?

5 thoughts on “The Secret of Scoresby Nab 12”