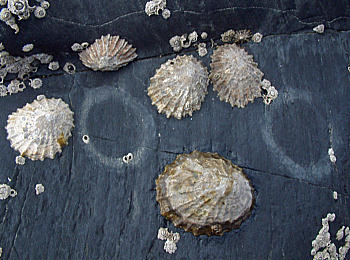 This is a tale told in lines scraped on stone by grazing sea-snails . . .

After dinner, Mattie’s time was his own. The tide ebbed below Nab House, leaving rocks sparkling with wet seaweed. Trippers thronged Scoresby Sands, and a knot of local kids hung round on a promenade. After a while watching, he shrugged and turned to the north side. He didn’t fancy being the new lad again.

spaceOnly one person moved in Hob Wyke that he could see. He took a zig-zag path down to the small bay.

spaceA tall and bony lad strode across the scaur. He had a mop of straight hair and wore a blue fisherman’s gansey with the cuffs rolled back to his gawky elbows. His long legs ended in cut-down gumboots, all raggedy-edged and almost matching.

spaceThe lad bent every so often and poked rocks with an old knife. He would drop something in a bucket and move on. The knife in his hand moved that fast Mattie couldn’t see what he did. He stepped closer and popped a piece of bladder-wrack with his foot.

spaceThe lad turned and looked at him. A slow smile spread over his wide face. It lit up his eyes, pale blue like a gannet.

spaceHe put the knife down, straightened up and rubbed his hand on his gansey. He checked it and held it out. Mattie smiled. They shook hands. Tommy’s grasp was big and strong, it folded round his own like a batting glove. He held it for a while and then put his head on one side, enquiring like.

spaceTommy answered slowly in a strong accent. ‘I’m picking flithers – some folk call’em limpets. Would you like a go?’

spaceTommy showed him how to sneak up on limpets. How to slide the tip of the knife between the shell and the groove they had worn in the rock and prise them off. Mattie soon got the hang of it. They picked and talked till they had a bucketful.

space‘I sell them at the baiting sheds for skeining – putting on fishing lines.’

spaceTommy picked up a swathe of wet seaweed and tucked it over the limpets.

spaceThey held the heavy bucket between them and lugged it to the harbour.

space‘Look for the big tunny fish. They used to catch’em off here –film stars and bigwigs from Bradford used to come to Scoresby for the tunny– so Alderman Weighell says.’

spaceTommy pulled him along Olav Pier. They beat off seagulls snatching at the bucket and came to a low brick building, stained and weather-beaten. A row of colourful signs ran along the top, and below them were stable doors. The top leaf of each door was folded back and painted matte black. Prices for different baits were chalked up on the wood.

space‘There you go,’ Tommy said and tapped a sepia photograph. A group of men in ganseys and caps stood by a blue tuna hanging from a thick rope. It was twice their height.

spaceThey set the bucket down.

spaceA short, flustered woman came to seewhat the noise was about. She nodded at Tommy and opened the bottom leaf of the door. Tommy flung the seaweed into the harbour. Together they passed her the bucket.

spaceShe gave Mattie a glance.‘What’ve you picked up off the beach this time, eh, Tommy?’

space‘Mattie Henshaw – he helped me pick these, Auntie Mary.’

spaceShe weighed the limpets, and tipped them into a barrel.‘Where’re you from, then, Mattie?’

spaceShe nodded and gave him a brisk smile. She handed him the bucket and dropped a handful of coppers into Tommy’s palm. They walked along the pier towards Scoresby town. Mattie licked his lips and looked round for a water fountain.

spaceTommy dragged out the coins and inspected them.‘I’m fain for a bottle of pop but…’

spaceMattie checked his change.‘Neither have I – let’s get a big one to share.’

spaceTommy’s smile melted into a sad face.‘But they’ve run out at Glenister’s and the pop wagon dun’t come while Monday afternoon.’

spaceMattie puzzled for a moment. He knew he’d seen some somewhere.

spaceLater on, they sat on a wall and watched the boats, taking it in turns to swig from the bottle. A bell rang the hour. Mattie glanced at the clock-tower on top of the Harbourmaster’s Office. He gave Tommy a nudge.

space‘I’d best be off. Mi gran’ll have my guts for garters if I’m late for tea.’

spaceTommy pointed up a steep, winding street.‘Yon’s quickest road. Y’know, I am glad you came back. See you later then.’

spaceHe’d ran halfway up The Bolts before he thought to ask Tommy what he meant.

That evening after brushing his teeth, Mattie looked outside, thinking. The sea swayed black under a dark purple sky. A few lights shone above the shore. There were no streetlamps, no traffic lights; one car swept its headlights along a winding road. Was this his home now? For good?

spaceA draught blew through his pyjamas. He shivered. It was no use. He’d have to go. He put on his dressing gown and padded to the ladder. He put his hand on the bit of panelling round the top and looked down. The steps faded into deep shadows. That little oil lamp beside his bed didn’t give out much light. He slid one foot on to the first step and leant over to grasp the rope. He felt with his toes for the next step. It made a squeak and his shoulders twitched. He gripped the rope and climbed down facing the dark.

spaceA wind got up and Nab House creaked like a ship at sea. He reached the bottom of the stairs and then fumbled along the landing. Floorboards shifted beneath his feet and his fingers slipped off the handrail. He halted, not knowing where to go.

spaceA door opened, and candlelight outlined a dark shape. There was no sound but wind outside. Mattie’s heart beat loudly among the restless shadows.

spaceShe moved out of the doorway so Mattie could see along the landing.

space‘Netty’s there. I’ll come up in a bit.’

spaceHe found the toilet, then crept back to bed. It was so quiet he could hear slippers on the carpet runner.

space‘Can I come in lad?’ Grandma called up the ladder.

spaceShe picked up his Jules Verne, put a bookmark in and snapped it shut. Her broad fingers found it a space on the shelf. They straightened the row of books as she spoke.

space‘Settle down now. I should have tucked you in afore.’

spaceHe lay down and let her pull the covers across him. She pushed them so tight under the mattress it felt like a hug. A wailing sound rose from the bay. It made eerie music: lovely and wild. His eyes prickled.

space‘Nought to fret over, pet.’

spaceShe leant forward and smoothed his hair. Like his mam used to.

space‘Goodnight and God bless, our Mattie.’

spaceHe didn’t trust his voice not to tremble and said nought. She dimmed the oil lamp and left. The strange singing sent him to sleep.

6 thoughts on “The Secret of Scoresby Nab 14”