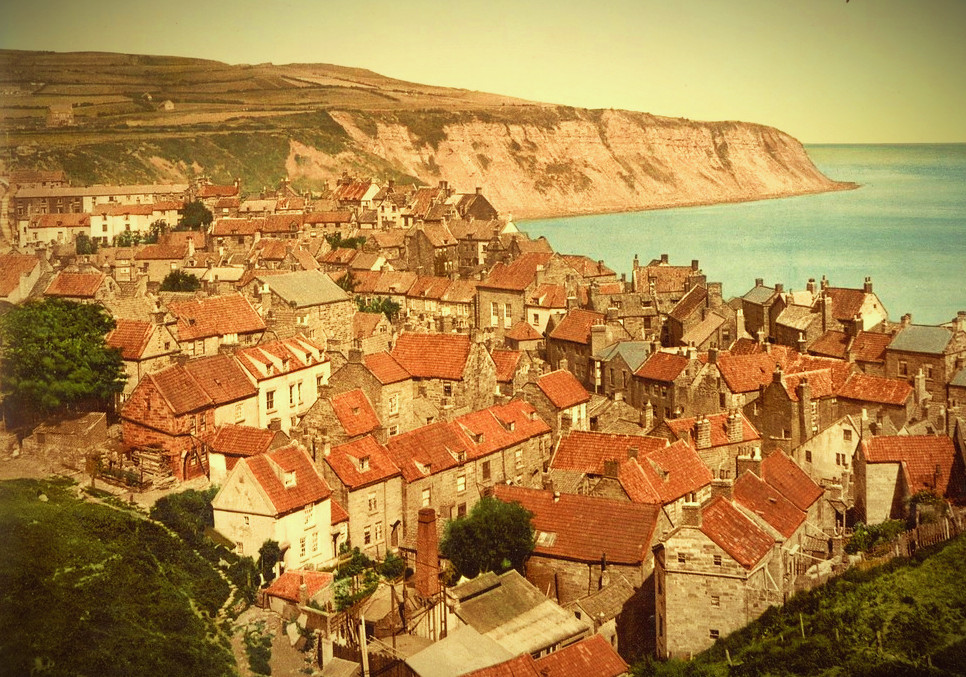 This is a tale told in whitewashed shells and pebbles in small, slanted gardens . . .

The road Mr Bedlington sent him along was steep. Rows of flagstones wound in steps between houses and tiny gardens – or what they called garths in Scoresby. Every patch of soil held vegetables ringed round with pebbles. He reached a crossing, a rare bit of flat. He dumped his case by a tap and slurped water from his hand. Another scoop splattered onto his neck.

spaceHe looked at the map, and the marks left on his palm by the suitcase handle. When he knew where he’d to go, he picked the case up with his other hand and trudged on.

spaceThe slope levelled off, and he passed a worn fingerpost. He made out ‘Hob Wyke’ and knew to go past. In a nearby garth, he found his next landmark. Two curved posts leant towards each other in a tall, pointed arch. A few sparse roses scrambled up the grey-green whale bones.

spaceHe turned right onto bare, thin turf. Its short grass shook. The paper bag that had held the fruit flapped and tore out of his hand. It sailed off over the cliff and passed a seagull hanging level in the air. More gulls faced into the wind on either side of a narrow ridge. Along it, the path dwindled down to a parting in the grass. His grandmother’s house sat at the end, alone on top of the Nab.

spaceHuge stones formed the walls. Three storeys of them squatted under a heavy roof, enduring the weather for centuries. Wind and spray had carved folds and pleats deep into its sides, and strong ironwork held thick shutters ready beside each window. A wall sheltered a small garth with a shiny painted gate.

spaceMattie dragged his case along the path with both hands. His fingers ached and inside his head it sloshed like a bucket. He looked down at the gulls and beyond them to the scaur, a flat expanse of wet stone. Dots moved along lines of rock and seaweed.

spaceHe was looking down on folk’s heads. He’d never been so high up.

spaceAt the end of that narrow path, the wall round the garth felt solid and safe. He put his case down and opened the gate. It felt quieter here, out of the wind. He found a small porch and knocked on the low, wide door. He waited. No one came.

spaceHe peered in at the ground-floor windows. They gave blurry views of a kitchen and a sitting room, but no Grandma.

spaceHe went back to his case and brought it to the porch. He took off his duffle bag and sat down. His chin sank into his hands. Seaweed, hanging from a hook, flapped and shivered. Whatever had he done?

spaceSunshine and clouds passed over Nab House in waves. Gulls wheeled and cried. A pure white feather twisted down and then skittered round and round in circles. There was no traffic, no factory sounds, no passers-by. No choice but to wait and think.

spaceNo need for that. He tipped his case over, undid the clasps and found his book.

spaceRight when the Giant Squid attached its suckers to the Nautilus, a clang made him flinch and look up. A thickset woman stood with one hand on the gate. Her other hand held down the cover on a large basket. She had grey hair cut short and curled like frozen waves, and her face was square and tough.

space‘Tother basket could do wi bringing,’ she said and tilted her head.

spaceHe could take a hint. He put his book down and came out past his grandmother. She smelled of violets and starch and baking.

spaceThe basket was heavy. He hauled it through the porch straight into the kitchen and found a space on a large scrub-top table. A huge dresser filled one end of a wide kitchen with low rafters and white-washed walls. A range glowed at the other end.

space‘Go get your gubbins and put wood int hole.’

spaceHe put his case and duffle bag down on stone flags, then shut the heavy door. She took a kettle off a modern gas stove and filled it at the sink.

space‘I wondered where you’d got to. I’d business to attend to – couldn’t be waiting on you forever.’

space‘Dad had to go. He said I’d find my way here easy enough.’

spaceGrandma pursed her lips for a second. Then she snapped a little metal cap on the kettle spout and set it on the ring.

space‘Well, you’re here now. Upstairs lad – let’s get you in your room afore that boils.’

spaceShe lifted his case with ease, and he followed her up a flight of steep wooden steps. They came to a narrow landing. She moved on briskly to an even steeper set of stairs.

spaceA rope hung in swags beside it, and she pulled herself up like a mountaineer. Mattie followed. Halfway up, a tiny window like a glazed arrow slit showed how thick the walls were. He stood on tip-toe to see. He could make out sea and long lines of rocks heading out towards the horizon.

spaceGrandma’s voice came from above, and he caught up sharpish. He paused with his shoulders jutting into the room. It was a captain’s cabin: all panels and sloping ceilings and gables with odd-shaped windows. Grandma stood his case beside a box bed. His box bed.

spaceA wailing squeal came up behind him.

spaceHe clambered out of her way. She was light on her feet and soon he was alone in the room except for the distant sound of waves.

spaceHe sat on the bed. It was deep and soft with clean white sheets, thick blankets and a stack of pillows. He swung his duffle bag off and looked for somewhere to stow it. Summat told him he’d best be tidy for Grandma.

spaceHe found hooks that folded out from the wall and reached to hang his duffle bag up. Then he set it down and pulled his parka out. The last thing Mam had bought him. A breeze passed through the fur trim and he gave it a stroke. He threaded the hanging loop on a hook and rubbed his cheek against the fur for a second. Then he shoved the duffle bag onto another hook and headed downstairs.

spaceA cup of milky tea and a rock cake on a proper china plate sat on the kitchen table. His grandmother’s voice came from a side door.

space‘That’s for you – summat to put you on while dinner.’

spaceThe side door opened onto a room full of shelves. Cans and bags and packets sat on them in stacks. Others held tins stamped ‘cake’, flans and curd tarts under net covers and large glass jars of home-made biscuits.

spaceHe sat down and took a slurp of the tea and a bite of cake. It crunched slightly, but the insides crumbled in his mouth, soft and delicious.

spaceGrandma came out of the larder with a packed willow basket and put it on the table.

space‘There you go,’ she said when he’d done.

space‘Sorry. What do you mean, Grandma?’

spaceHe bent to pick it up. It needed both hands. He put it down quickly.

space‘Strawberry jam for Miss Lacey’s Tea Rooms, a rhubarb pie for the Megginsons in the tin – and I’ll want that back, mind – and the list.’

space‘List of the shopping you’re to bring back, lad. Look sharp, Bedlington’s closes at one.’

space‘But where are all these places?’

spaceShe bustled him back out into the garth and pointed south over the wall.

space‘There, on tother side – that Tudor-looking effort – that’s Miss Lacey’s Tea rooms – remember to go round the back. Megginson’s is that one at the end with the cowl on top of the chimney. Go through Dumple Court, that’s your best road. And knock loud. The old lass is a bit deaf.’

spaceMattie sighed on the inside. Not quite the welcome he’d dreamed of.

space‘Where will I get the sugar?’

spaceShe said it like he were supposed to know.

space‘You can’t miss it – our Jacob allus has a nice display out on the main road to the harbour. Fruit and what not.’

space‘Oh – you mean the greengrocers?’

spaceShe nodded, picked up the basket and slung it over his elbow. It made him lean with its weight.

space‘Right then – off you go, and earn your keep.’

Header image adapted by K. M. Lockwood from a postcard in the Public Domain

7 thoughts on “The Secret of Scoresby Nab 13”