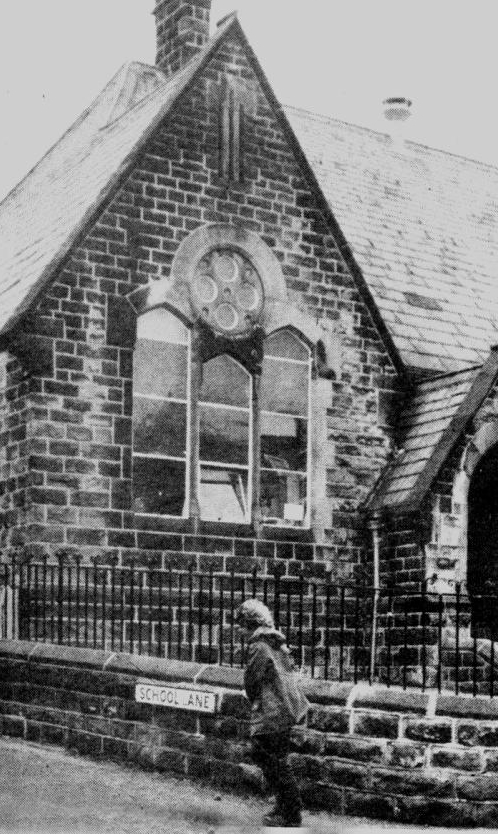 This is a tale told in sweet wrappers swirling by a bin on a cold day decades ago . . .

As the Pilgrim told this second part of the tale, children wondered at the past and grandparents recognised it well. Her mouth took on the words of her own folk and this is what she told:

Mattie Henshaw ought not to get mixed up wi those two. After four days at Lawefield Middle, he knew that.

Even wi woolly hats pulled round their ears in a freezing March wind, he knew the two lads leaning agin the wall of the boys’ bogs were Kieran and Barry. In the warmest spot slouched Kieran, a skinny lad with yellowy-grey skin and well-picked scabs, and next to him, Barry his bulgy sidekick.

Nought to do wi him.

In front of Kieran and Barry stood a little-un, not long out of first school. Kieran folded his arms and slid down the wall. His legs stuck out right across the little-un’s way. He spoke in a pretend-friendly voice. ‘Now where do you reckon you’re off to?’

He poked Barry with his toe. Barry stepped in front of the entrance to the boy

The little-un shook. His legs were tiny blue matchsticks.

space ‘I just want to go to ‘toilet.’

Poor little wean could do wi’out this, Mattie thought.

Kieran turned to Barry. He pulled his hat away from one ear.

space ‘Did you hear summat?’

Barry put on a puzzled face.

space ‘I just want to go to ‘toilet!’

Barry barred the way with his fists on his hips. The little-un shuddered.

It was no good. Mattie stepped forward.

space ‘Leave him be,’ he said.

Kieran stood up straight and glared at Mattie.

Mattie signalled the little-un to go round his back. The titch skipped into the bogs like a crisp packet on the breeze. Barry moved towards Mattie meaningfully. Kieran held his hand out.

space ‘Pay the toll then.’

Kieran’s gaze passed over the old parka that Mattie’s Grandma had altered for him, his threadbare jumper and his scuffed shoes. Only his tie was new.

space ‘Even you must have summat worth havin. Spogs, brass, whatever you’ve got in your pockets.’

Kieran gave a nod, and Barry went for his pockets. Mattie grabbed his wrists. They tussled and went round each other in a strange dance. The little-un peeked out of the bogs, then ran off. Good. Then Kieran went somewhere out of sight. Not so good. Mattie’s arms ached with holding Barry off. The bigger lad might be stronger, but Mattie hung on. Barry had no right to nick his stuff.

His hood jerked backwards. The pull-cords tightened round his throat, pushing his Adam’s apple into his windpipe. He let his arms fall to his side. Showed he’d given in.

Kieran spoke over his shoulder. ‘Cough up, Squirt.’

Mattie tried to pull the parka away. He felt his pockets being turned inside out. Then Barry held his hand up with the contents on his palm.

Bits of fluff and scraps of paper flittered away. One was Mattie’s return bus ticket. Kieran’s chin dug into his shoulder and his grip eased off a bit. Mattie worked two fingers between his neck and his collar, but he still couldn’t speak.

Kieran’s weaselly face peered round Mattie’s side and his nose wrinkled up.

space ‘Is that it? Two manky old sherbet lemons and a bit of Spanish.’

Mattie nodded. There was a yank and a rip.

space ‘Oh – that’s torn it,’ Kieran said then ran off laughing. Barry lumbered after him.

Bitterly cold air rushed down Mattie’s aching windpipe. He wheezed and scrabbled at the knotted pull-cords. His chilled fingers slipped off the slimy nylon, and it took several goes to loosen it. Lots of swearwords raged in his head.

He got free and shook his coat. The fur trim on his hood dangled like a broken limb. He belted off looking for Barry and Kieran, his thin shoes skating on the frosty tarmac.

Mr Aycliffe, the PE teacher, walked round the playground clutching a cup of coffee in both gloved hands. He had his tracksuit zipped up to his beard and his breath came out in smoky gusts. He glanced at his watch.

Mattie slipped on the icy playground and collided with the teacher’s side. The Bearded Wonder’s coffee launched into a lukewarm brown plume, then splattered onto the ground. Mattie pushed up off his knees and made to run off. A large, hairy hand held him back.

Mr Aycliffe kept hold and leant down to talk into his face.

space ‘Well, Henshaw – I don’t know what sort of institution you were at previously, but here at Lawefield Middle School, we don’t tolerate your sort of behaviour. It’s time for lessons now, so I shall arrange for you to have a little interview with the Headmaster on Monday morning to set you straight.’

Mattie’s indignation frothed up like a milk pan boiling over, but there was nought he could do. A no-show would mean Dad getting involved. That was the last thing he needed.

space ‘Right then. Off you go. Late to registration. Not a promising end to your first week. I estimate you will have six minutes to change for Games.’

12 thoughts on “The Secret of Scoresby Nab 2”