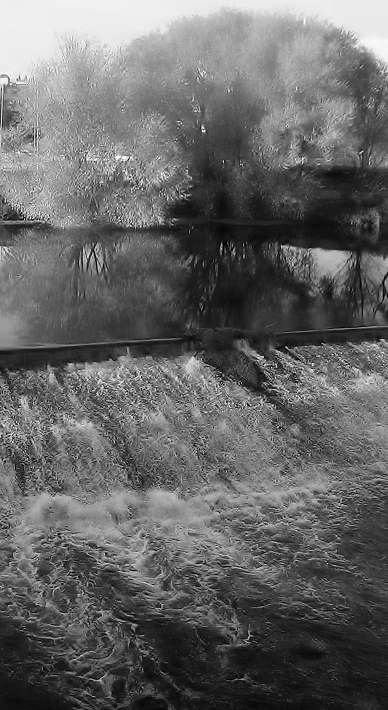 This part of the story is written in spinning willow leaves on a trapped river . . .

Mattie hated Games. It didn’t matter which school he went to; it were always horrible.

He peeked out of the temporary changing rooms. They were at least as old as him, going by the graffiti. Muddy playing fields stretched out smudged grey with damp. A chain-link fence marked a quarry at the far end. Down the side, netting on poles kept balls away from houses and factories. Wires caged him in.

A group of boys in a ragbag of football gear hung about on the grass outside. The tallest bounced a ball from knee to knee and the Bearded Wonder filled in papers on a clipboard. Mattie crept out of the changing rooms last.

space‘Ah, Henshaw, so glad you could join us.’

Mattie looked up, then sidled round the back.

space‘Put the ball down, Asquith.’

The tall boy put his foot on top of the ball and folded his arms. Mr Aycliffe walked through the boys separating them into two. Mattie ended up on the edge of the group around the tall boy, Robert Asquith.

space‘Do we have to have him, Sir?’

space‘Yes, Asquith. The sooner you get your lot organised, the sooner we can get on the pitch.’

space‘Shove him in goal, Robbo,’ somebody said.

space‘Even he can’t do much harm in there – if we keep the ball away from him,’ another voice said.

Robbo rolled the ball under his foot, flicked it up and caught it. He jerked his head towards the far end. Mattie trudged over and stood in goal.

The afternoon dawdled on. His jersey turned darker grey with mizzle settling. Drops of water fattened on the netting and the long grass drooped. A buzz of tackling and passing fluttered at the other end. He could live with that.

Blast. The ball shot towards him. It bounced on tussocks and flung water around, leaving a trail like a damp finger on a blackboard. It rolled closer. Boys clustered round the ball. It kept coming in jerks and making sudden moves to the side.

He came out of goal. That much he knew he ought to do. He tried to keep light on his feet, shifting crabwise to defend the great gaping hole.

Somebody’s boot connected and drove the ball arrow-straight. The ball hurtled low and fast, jinking round old molehills and throwing up spray. It slammed into the side of his pump. Pain flared up through his foot and into his shin like a match lighting. His rubber soles slid out from under him and he landed in a splatter of soil and rain.

He looked up at the grey metal crossbar. A fat raindrop, like a tear, formed at a joint and fell on his nose. He spluttered and shook his filthy hair. Robbo laughed, then the other lads wheezed and guffawed. A whistle went off somewhere. They left. One arm came out of the mud with a squelch. Then the other. Filthy, cold and dripping, he dragged himself to the changing rooms.

Lawefield was all but dark by the end of school and Mattie gave up on finding the bus ticket. He walked back to Inkerman Terrace alone.

Narrow streets and factory lanes twisted around a knot of canals. Derelict mills made canyons of blackened stone along their sides. Even the river Eyre ran channelled between grimy walls of brick. The cinder path alongside the Eyredale Cut was the quickest way on foot to Mrs Harrop’s.

Mattie lugged his Granddad’s duffle bag, full of sodden kit, beside the sluggish water. Ducks landed, paddled about and left. Willow trees swayed like hula skirts. Leaves twisted down and drifted along to a weir. It was his favourite place in Lawefield.

Something glinted down by Neckholme Island. He nipped over to a mound of soil and weeds, stood still and peered into the water. There was something glimmering. He moved closer. A rusty bottle-top poked out of the silt, old bedsprings trailed waterweed – and a glass hand shone. It looked like the water had gone solid. He could see veins in the wrist, lines across the palm and creases behind the knuckles. He leant over for a better view. Then the hand beckoned him.

His head jerked back. He couldn’t help it.

He looked again. The surface moved in blurry circles. He waited while the water settled, peering through the distortions. There were nought but weeds and rubbish. He were dreamin.

The air thrummed with the sound of the weir. Mattie gawked at the river. Water flowed past rafts of leaves and fag packets caught in drowned branches. It rippled across old stones, slid along wavering strings of green weed, and travelled on to the coast.The Eyre sent a message out to the North Sea

The hooter went off at the Supaloaf Bakery. Mattie legged it. He were late.

7 thoughts on “The Secret of Scoresby Nab 3”