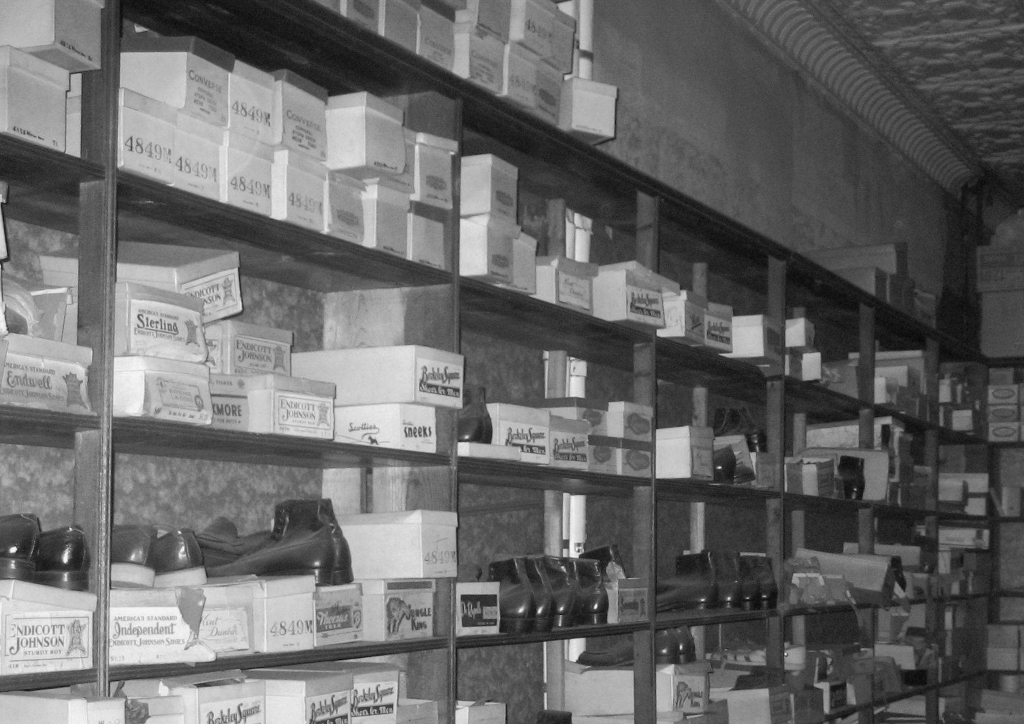 This is a tale told where a bell tinkles to let you in a room that smells of leather and shoe polish . . .

Saturday morning, Mattie and Dad sat down to breakfast together. Dad ate quickly.
space‘Look sharp and we’ll catch the quart’ to bus,’ he said.
Mattie looked up from a thin, crinkly edged fried egg.
space‘Do we have to? Rob Asquith’s taking his football down the Rec – and I’ve done all me homework.’
space Neither was exactly a lie.
Dad put his knife and fork together and finished his tea.
space‘If we get a move on, you can go this aft ’

Mrs Harrop came over from the sink in a floral pinny. She collected Dad’s empties and hovered. Mattie ate up.
space‘He could come with us,’ she said, ‘Sherida and I are having a nice little trip out to buy her a new costume for the Milnthorpe Mermaids. Pity he’s no interest in swimming.’
Mattie glared at Dad.
space‘That’s right kind of you, Mrs Harrop – but I need to go into town anyroad. I don’t often get chance of a Sat’day.’
space Mrs Harrop smiled, but relief shone in her eyes. She set pink rubber hands on Mattie’s plate and paused, bending down low. She looked straight at Dad.
space‘It’s no trouble. Is there anything I can do for you?’
space‘No – thanks. We’d best be off.’
Mattie and Dad tucked their chairs in together and headed for the hall.

Mattie sat on the bottom stair. He put one shoe on and wriggled his big toe. The leather flexed, then split. He checked round. Dad was still lacing his boots.
space‘Rather play tig wi hatchets than go shopping wi them two,’ Mattie whispered.
Dad grinned. He held a finger to his lips and tilted his head towards the door.
space‘Bye, Mrs Harrop!’

The shoe shop was small, dark and cramped. Mattie sat on a green stool with a matching footrest. His bare legs stuck to the leatherette surface. The assistant put the boxes down on the floor next to Dad.
space‘There’s these two in his size, sir.’
Mattie undid his right shoe, and the assistant guided his foot into the cool leather. She squeezed the toe.
space‘Is that pinching?’
space‘No, Miss.’
space‘Plenty of growing room,’ she said to Dad. He nodded and read the paper.
spaceShe pulled the ankle strap across. It wouldn’t go. She tugged, but it didn’t fasten even on the last hole.
space‘Pity. Let’s try these, shall we?’
spaceShe passed over a shoe with little holes punched in it. She took out the grey paper stuffed inside. Most of his foot went in, but he couldn’t get his heel down. The assistant passed a shoehorn. His heel slid down the curved plastic and black leather clamped round his toes. He tried not to wince when she laced it up.
space‘Let’s try the other one.’
It was the same – his foot slipped down the shoehorn into a vice.
space‘Very smart. Have a walk round to show your Dad.’
He hobbled round. Told himself they’d wear in. Dad set his paper down and watched.
space‘They’re too tight, aren’t they, Mattie?’
He stared downwards, gave a small, sad nod, and turned to Dad. Dad looked directly at the assistant.
space‘Have you aught else?’
space‘We could try some sandals, sir. They’ve generally got a bit of give.’
Mattie shook his head behind her back. Nobody else but Dad must see his feet. Ever.
space‘No – thank you. Sorry – they have to be proper shoes- school regulations, you see.’
space‘I’ll check in the stockroom. You never know…’
space‘Thank you, Miss.’

The assistant left. Mattie sat down and undid a shoelace. ‘Looking forward to Tuesday then, Dad?’
Dad lowered the paper.
space‘School Concert – at the Old Folks’ Home?’
Mattie dragged one shoe off. He pulled the squashed sock away from his toes and made a start on the second shoe.
space‘Sorry, son, I’m away up to Middlesbrough first off then a return load to Sheffield. Don’t reckon I’ll make it.’
spaceMattie yanked the shoe off. Shoved it in the box. Gave it a shake. Slapped the lid on. Dad’s voice went all jolly.
space‘Will the Elmet Examiner be there, do you reckon? “Children’s choir hits the high notes”, eh?’
spaceHe didn’t look at Dad. He stacked the shoeboxes and spoke to the floor.
space‘I wish she -,’
space‘I know you do.’Dad’s voice grew soft and distant. ‘So do I – love, so do I.’

The assistant came back carrying another box. She blew across the top.
space‘Might know it’d be on the top shelf.’
spaceShe knelt down and held one shoe open on the sloping footstool. Mattie’s toes slid straight in. She did it up fast, then gestured for Mattie to swap feet. The second fitted too. She sat back on her heels and smiled. He stood up.
space‘That do, our Mattie?’
Mattie nodded.
space‘Have a walk round – don’t want you crippled.’
The tiny shop only allowed for a tight circle.
space‘They’re fine.’
space‘This way, sir.’

Dad followed the assistant to the till. Mattie changed into his old shoes and put the shiny new ones back in their box. Dad’s voice sounded sharp.
space‘How much? That’s not what it said int window.’
Dad rummaged round in his trousers.
space‘I’m sorry, sir, but wide fit’s extra,’ the girl said.
spaceMattie stood up, knocked the pile of shoeboxes skew-whiff, and searched his pockets. He glanced at the window in the till and counted the change. He dashed to Dad’s side and tipped the money on the counter.
The assistant gathered the money, rang up the sale and gave the receipt to Mattie with a smile. She packed the box into a brown paper carrier and handed it him like he were a gentleman. Dad held the door open. They blinked for a moment on the bright pavement.
space‘When we get back, straight off down Rec,’ Dad said. Mattie looked away. He’d all but forgotten the fib. ‘With a bit of luck, Rob’ll still be there.’

4 thoughts on “The Secret of Scoresby Nab 5”