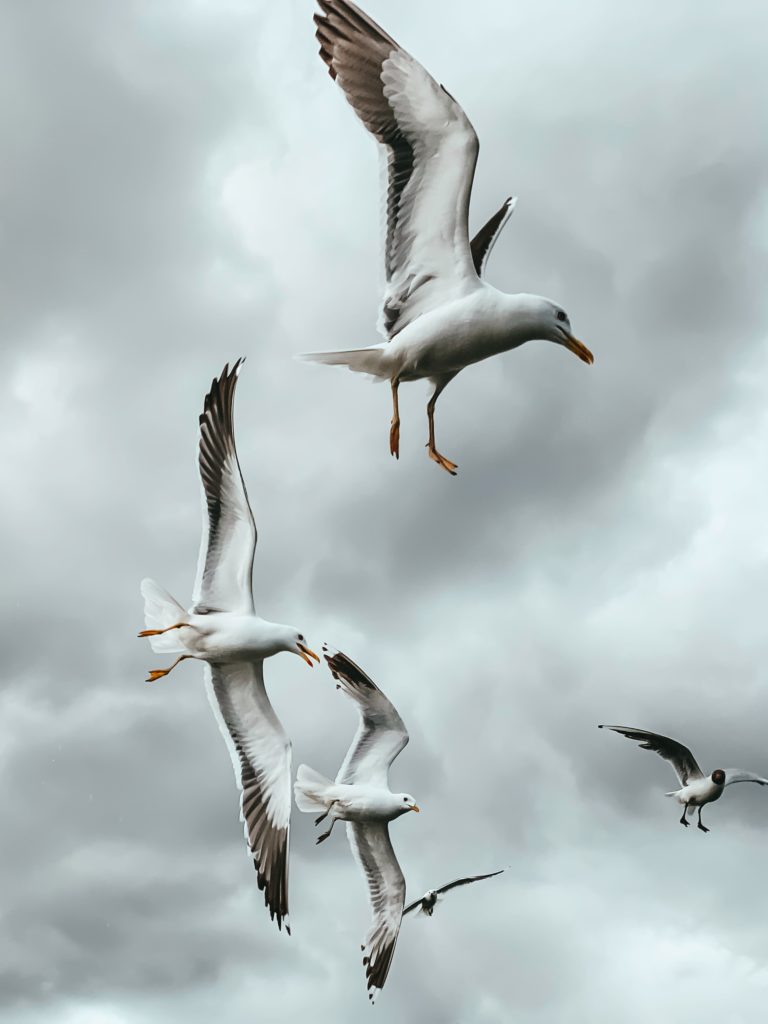 This is a tale told in washed-up planks, glints from broken glass and the skrike of gulls . . .Back at Nab House, Grandma scowled and held out a contraption made out of wicker and leather. ‘Where on earth have you been? Hold fast while I get the back-creel on you.’

spaceStrong arms turned him about and fastened straps on his shoulders like a knapsack. It felt odd – but not so awkward as carting a basket on your elbow.

space‘Away with you to the allotment. We need lettuce and cucumber and tomatoes. Your grandfather’ll be wanting some salad wi his dinner now, not next week.’

spaceMattie and the back-creel creaked up to the allotments. Gulls circled and cried overhead, bright-eyed and eager.

spaceGranddad’s allotment stood out. Bright paint like Joseph’s coat of many colours covered a driftwood shed. Sea-findings and repurposed anythings formed the fence. Every inch that wasn’t vegetables held flowers: orange marigolds to shoo the carrot fly away, purple morning glory keeping the red runner bean flowers company, or pink thyme creeping among crazy paving. Trim and tidy – save for one thing.

spaceA cold frame made of old windows backed onto the wall along Meeting House Lane. Smashed. Granddad lent a broom against the wall and stood in front of the mess. He held his hand up like a policeman halting traffic.

spaceGranddad’s eyes were dim and troubled. So sad. What was up?

spaceGranddad shook his head and gave a wry smile.

space‘Glad to see you too, Mattie lad. Put the back-creel down – your grandmother will have to wait for her salad. We’ve a bit of clearing up to do.’

spaceHe moved towards the broom and Mattie saw what had damaged the cold frame. A dead seal sagged in a splash of broken glass. Granddad gently swept shards away from the corpse.

space‘Who would do such a thing? And why your allotment?’

spaceGranddad took a knife from his pocket. ‘Go fetch us the barrow from the shed – I’ve some flaying to do.’

spaceThe wheelbarrow proved easy to find in the neat shed. He turned to push it out and the smell grabbed hold of him. The air felt swollen with blood and rot. It plugged his nostrils and the stink pinched his nose till it ran. He steered the wheelbarrow down the path in a daze.

spaceGranddad beckoned. The breeze changed and Mattie breathed the sea air in deeply. He set the wheelbarrow down and they took hold of the seal’s flippers. The skin felt cold and leathery. They flopped the body onto the slabs in front of the cold frame and Granddad took off the last of the pelt. He set it on one side and shooed flies away from the pale pink blubber. Mattie looked away. He wouldn’t let his eyes focus.

spaceMattie gripped tight, eyes closed. The body landed with a heavy squelch and the wheelbarrow rocked. A gull landed and they chased it off. Its flock circled and skriked above them.

space‘There’s some sacking in the shed – will I get that, Granddad?’

space‘Aye,’ he said without looking up and began to scrape bits of flesh away from the skin. Mattie ran for the sacking and covered the body. He tucked its whiskers beneath the coarse cloth and shuddered. Poor creature.

spaceGranddad straightened up and elbowed Mattie gently. ‘Can you turn me the tap on?’ He rinsed his red knife and hands over a bucket.

space‘Will I swill the flags now?’ Mattie asked. He wanted this over and done with.

spaceGranddad rinsed and shook the skin till the ground near the tap was sodden. He wrung it out like a grey shammy leather, stepped away then nodded. Mattie threw water over the flags till the blood vanished into the soil. He threw more over the smashed cold frame. It splattered and sprayed all over. He sloshed and sloshed till not a trace of seal remained. Then he put the bucket back and went towards the wheelbarrow.

space‘No need for you to go. You wash your hands and fetch salad for your grandmother like she were expecting.’ Granddad folded his knife with a snap and slipped it into his trousers. A piece of paper fell out and fluttered onto the path behind him. He took hold of the wheelbarrow and moved off with a squeal from the axle. Mattie picked the bit of litter up and shoved into his pocket.

spaceGranddad paused by the road. He spoke cheerily over his shoulder. ‘You go get the lettuces and that sharpish. Best not keep your grandmother waiting anymore than you have to. Tell her I’ll not be long.’

spaceThe wheelbarrow squeaked off down to Scoresby. Mattie soon filled the back creel. It felt good to be doing something, not thinking about that seal. He climbed the stile out of the allotments then thought I’ve still got that litter.

spaceHe found a bin beside a bench on Meeting House Lane and took the scrap from his pocket. Blood smeared the greaseproof paper, such as a butcher might use. Thick pencil letters showed through. He unfolded it. The print remained clear enough to read.

‘Remember – we know what the boy is.’

8 thoughts on “The Secret of Scoresby Nab Episode 19”