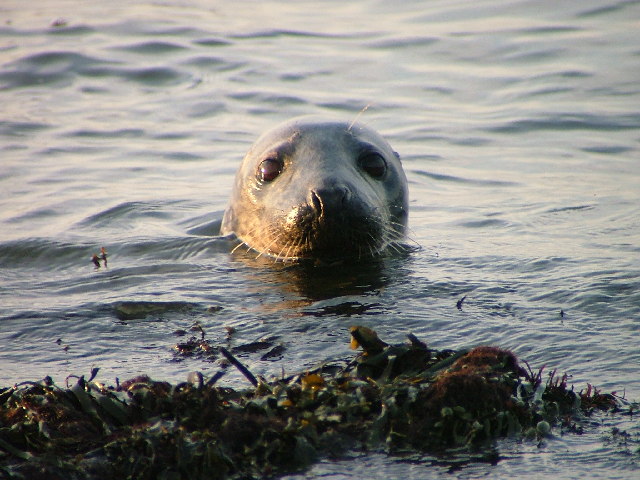 This is a tale told in seafoam, curling whiskers and whispers of wind through heather . . .

Mattie woke that early on his thirteenth birthday, stars still glimmered through the window.

spaceHe dressed and padded downstairs in his socks. Night-cold rose from stone floor tiles. He put his boots on by the range, glad of the stobbed rug under his toes. Sun rose through the mist and enough light came through the porch to see the time. Four o’clock – he’d never been up at this hour.

spaceAll the way down the cliff path, he kept a watch on the sea. He wasn’t off to pay any mind to some scribble on a butcher’s bit of scrap.

spaceThe tide stalled in that shivery moment before it turned: they called it slack water here. Everything waited. Seaweed kept still. Rock pools brimmed, glassy and motionless. Even the waves on the sand rose and sank no more than a baby breathing.

spaceHe sat on the seawall and bared his feet. There was nobody to hide from. Nobody to care what he was.

spaceHe widened his eyes to find the line where sea met sky. Everywhere had the colour of a shirt button and he couldn’t make out anything. The haze melted. Two grey figures appeared, swimming toward the shore.

spaceOne moved away to the end of the Nab. A reef jutted out above the water and a large mother seal wriggled up onto it. She lay still in the rising sunshine. A long scar ran down her side like a dark shadow.

spaceThe other kept coming. It left a wide ruffle of paler water behind it. The light grew, and Mattie made out whiskers and a ring of grey spots round its neck. He dropped and ran along the edge of the water. The seal watched him with wide eyes like wet pebbles, unblinking.

spaceGranddad’s quiet voice made him start.

space‘Yon’s come to wish you Happy Birthday – like me. He knew he’d find you here.’

space‘Here you go – I reckon you know what this is.’

spaceThe onshore breeze combed through silvery grey fur like a living thing. Something alive and magical in Granddad’s arms. A wave touched his toes, sparkling with cold. It sucked the sand from underneath him. He glanced back at the seal. It sniffed the air expectantly.

spaceWhat was all this to do with him? Nowt.

spaceMattie shook his head and ran off up the beach. Pebbles scattered under each stride. He liked the harsh crunching noise. He liked the hard, coarse, real concrete of the seawall. Wriggling his socks over his salt-sticky toes felt good to concentrate on. He didn’t have to see his horrible feet.

space‘I’d best get back afore Grandma misses me,’ he shouted cheerily. All the way back to Nab House, he didn’t look back at his grandfather or the seal once.

At breakfast time, Grandma sounded both amused and irritated.

space‘Have you combed your hair with a pitchfork? Birthday or no birthday, you’ll have that sorted before you’re going on any trip, Matthew Henshaw.’

spaceShe served him an enormous plateful of everything.

space‘Eat up – you’ve a busy day ahead.’

space‘Thanks, Grandma. Can I have some cheese in my pack-up, please? To go with my cake.’

space‘I thought you weren’t so keen on cheese.’

space‘It wouldn’t be for a dirty great mouse, would it? A mouse by the name of Tommy?’

space‘Speak of the devil,’ Grandma said.

spaceHeavy boots landed on the floor in the porch and Tommy came in. She fried another doorstop of bread.

space‘Surely you’re not taking that coat with you, Tommy Flaup – you’ll bake out on the tops.’

space‘It gives me summat to sit on.’

spaceAll the way to school, Mattie scuttled to keep up with Tommy. Halfway along Bay Bank, a rumbling sound sawed through the quiet. A diesel engine, large and powerful, coming nearer. They jogged on, looking this way and that. Another engine chugged and boomed somewhere beyond Fisherhead.

spaceThey found a few others hanging around the school yard. Some lads stood on the coal bunker on look-out duty. The bell tolled and some smaller lasses held their hands to their ears.

spaceA coach rattled into view. Bright red with a swirly white flash down the side. The driver switched the engine off but Scoresby still echoed with machinery.

spaceThe teachers made everybody line up. They put the ones likely to be sick at the front of the coach and then it was a free-for-all. Mattie dabbed the back seats for Tommy and their mates. No sign of the girl with the white blonde hair.

spaceThe coach jerked and swung round the narrow roads at the top of town. They lurched past the Meeting House and headed for Haldane Cross. A huge stone shone in the sunlight above the town. It stood out gold against the dark heather. Wisps of something dusty and yellow rose and blurred the landmark. More rose and blotted it out altogether.

spaceThe coach stopped. The lads crammed against the windows of the coach. PC Garbutt stood in the middle of the road with his hand outstretched.

spaceA giant machine lumbered down from Brant Edge. Its paintwork was mustard yellow and dented, and its caterpillar tracks left a pattern in the earth like snakeskin. A flap rested on its upright exhaust. It flipped up every now and again with effort.

spaceTommy wiped the coach window with his forearm and pointed.

space‘Look at that – a Drott International Combined Usage. That’s the 1964 model – there’s the clamshell adjustor with dual hydraulics. Makes all the difference for road planing, you see.’

spacePC Garbutt directed the Drott towards the coast. Every head turned to watch it bounce over the cobbles, even the sicky ones and the teachers at the front.

space‘I don’t like the look of that so-called hardcore,’ one teacher said.

space‘More like any old scrap– all sorts of rusty old metal and concrete.’

space‘That’s not what they promised -,’

spaceThe coach started up and more din drowned out the teachers’ conversation. The coach moved off then stopped, rocking as the brakes bit swiftly.

spacePC Garbutt held the traffic up again. Trippers’ cars and fish lorries and farm tractors and even the rag-and-bone man from Strenshall stood waiting. A rusty red dumper truck with bulging tyres swept down the road. Diesel fumes and black smoke followed in a cloud like some stinking genie.

spaceThe policeman coughed and waved the traffic on. The coach crawled up the steep hill and into the dark shade of the Forestry Plantations.

space‘Sir – shall us get out and push?’

spaceThe other lads made paddling motions and then cheered a cyclist as he passed. Harry Megginson opened one of the little top windows and yelled through the gap.

spaceThe coach pulled up on the sandy patch by the cross. Mattie blinked as he got out of the coach. A trail of dust led right down to the bay. Grubby clouds hung over the town, yellow and bitter-tasting. He spat.

spaceHe stood still for a moment with his back to the sea. Where was Dad now? He ran off onto the bilberry and heather covered moor.

spaceThe morning passed busily. The teachers handed out a history project, a kind of ancient treasure hunt, and left them to it. Seven prehistoric burial mounds wanted climbing to tick off the list, and a great long ditch had to be run round. Mattie found a small circle of standing stones, peg-like and silver-grey with lichen. He counted them out loud for Tommy’s sake.

spaceLasses sprawled in busy groups round the meeting place. Tommy pushed up his hat and wiped the sweat off his forehead.

space‘What are they doing, Mattie?’

space‘They’re making rubbings of the metal notices – like you do wi wax crayons and church brasses.‘

space‘That looks proper boring. When can we have us dinner?’

spaceTommy nodded enthusiastically. Mattie went and got the thumbs up from Mrs McCutcheon. The teachers sloped off to the one bench behind the coach. The children found spots of bare sand or boulders to sit on among the heather and bracken.

spaceHe didn’t get chance to argue.

spaceThe Nab End Gang grabbed him. Fingers lashed round his ankles and wrists like a sea-anemone with a shrimp. No point struggling. They tossed him up and his lungs filled with nerves and heat. Each time he flew higher.

spaceA whistle blew and the gang let him tumble down in a heap. He lay among the heather, spluttering with laughter. Mrs McCutcheon shook her head.

space‘I think you boys need a cool down. There’s a pond just over there – that’ll do the trick. You’ll have plenty of time to dry off before we go back.’

spaceHe sat up. Some lads raced off, throwing their shirts in the air and catching them as they went. Some ambled along looking for lizards and the first bilberries. Tommy sat still on his coat. Mattie hunkered down beside him.

space‘You not fancying a dip then?’ he asked.

space‘You’ll not get me in Hallikeld Mere.’ Tommy pulled a face.

Other Nab Enders spoke up.

spaceThey started acting about, reckoning to be monsters.

space‘Pulled down into the cold dark depths.’

spaceThey laughed and ran off with their arms stuck out, zombie-fashion.

space‘Come along anyroad, Tommy. I need somebody to sit by my togs.’

© Copyright Mick Garratt and licensed for reuse under this Creative Commons Licence.

8 thoughts on “The Secret of Scoresby Nab Episode 20”