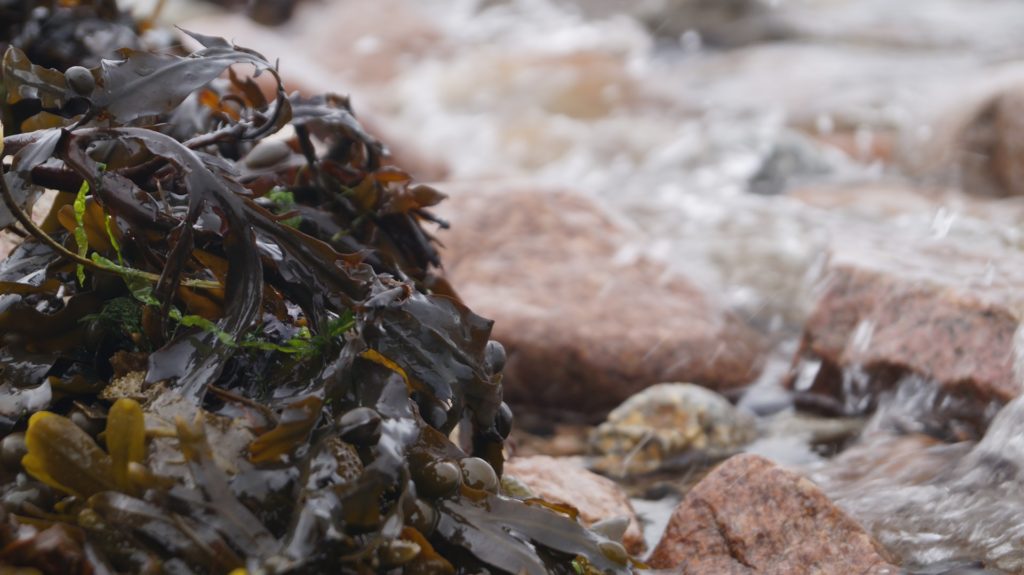 This is a story told in swishing strands of seaweed and drops of brine from whiskers . . .

spaceThe sun climbed high in the sky, and the distance between the cave and the water shrank. The rising tide waltzed the seaweed round then pushed it across the threshold. Still the other people didn’t go away. He wanted to yell Haven’t you lot got homes to go to? but kept his trap shut.

spaceChimes reverberated off the cliffs. An ice-cream van came slowly down the steep road and pulled up. The music stopped, and the air throbbed with the sound of the diesel refrigerator. Kids began scrambling up off the beach to gaze at pictures of Mivvies, Zooms and Funny Feet.

spaceHe slid down off the seawall and slunk round to the cave. No one looked at him – they were too busy queuing or licking. He waded into the cave and found his skin.

spaceAn enormous wave came, and he rode the backwash out of the cave. An onshore breeze flecked the steel-blue sea with white caps of foam. Breakers spurted up around the rocks and outcrops in sudden fountains of splattering brine. The sea romped with life, but no seals.

spaceHe swam out beyond the shallow scaur and hung upright in the water. Small wave-tops jumped up at his eyes. He stretched his neck and scanned the surface of the sea. Nought. The slap and salt of the water on his face pushed into his nostrils and glazed his eyes. He snorted. It was hard going. Fed up, he turned on his back.

spaceThe horseshoe of clouds around the bay soon became a pale smear. A few last wisps drifted and hung in tatters. The ghost net materialised in his mind and he rolled over. He dipped his head down and twisted full-circle. One large jellyfish drifted, dangling its poisoned ribbons in the empty sea.

spaceBulmer Ness stretched out to sea like a witch’s sleeve. Caves pierced its tall cliffs and a small patch of fallen rocks at the end emerged twice a day as the tides fell away. It made a good basking spot for two or three seals.

spaceOut on the dries, a large female looked up. She sniffed the breeze and her whiskers sparkled against her dapple-grey fur. She arched her back in a stretch, then lolloped off into the water. It swallowed her up without a splash. Smaller seals followed.

spaceHe sank down into marine soup. The water by the Ness swashed and simmered with plankton, flakes of tangle and clouds of algae. It was rich, green and impossible to see through.

spaceHe shut his eyes and let his whiskers do their job. A shoal of fish passed by – they were all wariness and jumpy movements. Somewhere, a distant sadness stained the water like cuttlefish ink – but soon faded. The electric flutter of a giggle came up behind. He could feel the tension of held breath and somebody keeping still.

spaceHe waited then whipped round. Their whiskers touched and arced like electric, and his eyes flicked open. His seal friend.

spaceMattie shot up to the surface. He took in the salty air and blinked. With a shake of his head, he tried to clear his ears. He couldn’t really have heard that, could he? No – it was just in his head, just make-believe.

spaceNow then, who else would I be? The voice was calm, quiet – and definitely real.

spaceI should have told you straight off.

spaceMattie swam away. He wanted to think it over without somebody else’s thoughts in his head. Even his brother’s. If that were true.

spaceWith a sudden perloop, the tip of the seal’s back flippers disappeared. He looked down into the green broth of a sea. Vague shadows of shapes moved and particles glimmered in the lines of sunshine that fell from the surface. It was hypnotic. Magical. Astounding.

spaceA seal for a brother. He shook his head.

spaceThe seal came up with a broad ribbon of tangle hanging from his jaw like a toffee-brown tongue. He flung it into the air, watched the holdfast and pebble splash down and swam after it. He threw it again and again, sometimes shaking the stalk like a dog with a lead. It made a grand game.

spaceMattie gave in. He darted after the flying seaweed and grabbed it before it hit the water. It fluttered in the breeze and slapped against the wavelets. He swam away from the seal, then tossed it close onto the edge of the dries. It rolled and came to rest out of the seal’s reach. With a dip down and then a sudden powerful sweep, the seal leapt up and grabbed it. He chucked it in a great arc, throwing drops of water like a broken rainbow.

spaceIt landed well ahead, barely visible in the pea-soup water. Mattie duck-dived after it, but it span down past the drop-off. He followed it. The pressure ticked in his ears and his lungs grumbled. The seaweed twisted into darkness. He gave a thrust and snatched at the end. The blade slipped through his teeth and tore.

spaceHe spat out the slimy rags and surfaced to breathe. The seal hung in the water so they were face to face. Their whiskers touched.

spaceHe paused and held his paws up. Mattie reached out to touch both at once. He let the slow deep voice into his mind.

spaceLike the Maoris do, he thought.

spaceA question poked into his mind with a friendly tickle.

spaceHe’d a lot of explaining to come. Waves spurted and glittered round the base of Bulmer Ness. Mattie concentrated on sending his thoughts.

spaceNever mind that for now – how about those sea-caves – can we go in there?

spaceUrra swam off for an answer.

spaceThe sea-caves ran with current. It swept them clean and clear.The water bounced and danced and swilled around, pushing and jostling the two brothers. Hundreds of jewel anemones splayed open in crimson, purple and orange splashes. Squat lobsters and velvet swimming crabs clutched the edges of crevices and hung on against the force. Mattie and Urra swam and twisted and spiralled round the wave-worn gullies.

spaceThey chased a glittering shoal of fry right through the caves. The tiny fish sewed their way through the stripes of light and shade, then disappeared in the murk beyond Bulmer Ness. They gave up and laughed together.

spaceUrra hauled himself out and Mattie followed. He flopped down near his brother and enjoyed drying out his fur. Something itched and he scratched it. He yawned and stretched. He rolled over on his back and let the sun paint his belly with warmth. His brother did the same. It felt good to be together.

spaceUrra? Mattie made the sound in his mind.

spaceLook, Urra – I’m sorry about the ghost net – you tried to warn me and I should have listened and I reckon it was my fault you got caught – and are you alright now?

spaceHe slipped off the rocks and into the sea. Mattie wriggled and manoeuvred to the edge of the water and then slid in.

spaceUrra bobbed up. He glanced at the shore.

spaceMattie gave him a shove.

Stop ordering me about.

spaceMattie felt a chuckle shake through the water.

spaceI am your big brother – and besides, you don’t want your Grandmother vexed.

spaceHow do you know about her?

spaceWe see and hear all sorts – nob’dy pays us any mind – unless it’s to chuck rocks at us – or worse.

spaceUrra headed for a darker patch of water, creased with flattened wrinkles. It stretched in a long wavering line back to the shore.

spaceTake the current. It’ll give you a quick swim back to Hob Wyke.

spaceMattie sensed both the water and the wind pushing them apart. Urra dived down and he was alone. His thoughts rose and fell in a cycle of joy and astonishment.

8 thoughts on “The Secret of Scoresby Nab Episode 28”