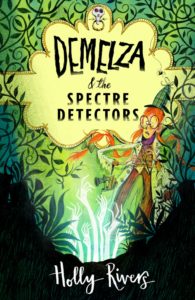 Demelza loves science – she loves it so much that she stays up late to work on her inventions.

But she soon discovers she’s also inherited a distinctly unscientific skill: Spectre Detecting. Like her grandmother, she can summon the ghosts of the dead. When Grandma Maeve is kidnapped, Demelza and her pasty-faced best friend, Percy, must leap into action to solve the deadly mystery …

NB You can read an extract on the website to get a flavour of Holly Rivers’ style.

A readers point of view

When you see that cover by Alex T. Smith – so spooky, magical and quirkily comic, you expect the story inside to match. And it it does – in spadeloads. When you look closely, you see smashing details like the tools in Demelza’s lab coat pocket and a deerstalker hat. All these make sense as you read on.

I have a habit of reading the dedication for clues to what sort of book I’m starting. So when I read ‘dedicated to magnificent grandmothers everywhere’,  I hoped for a warm family story. I wasn’t disappointed – though it’s far from an average one. If you want twee, it’s not for you; more for those who like daft, up-and-down yet loving relations.

Crammed full of magic, inventions and ghosts, Demelza & the Spectre Detectors has lots of elements that many children love. It’s about as scary as Scooby Doo – which is no criticism from me! Yes, there are spooky parts and peril, but the underlying warmth of family and friendship outweigh anything too distressing. There’s also a lovely theme of reconciliation.

The crackpot inventions are great fun and the overall tone is exuberant. Some vocabulary might need looking up for the fluent younger reader, but it would make a super book to read aloud to a variety of ages. I am rather hoping it is a series starter: what will Demelza get up to next? 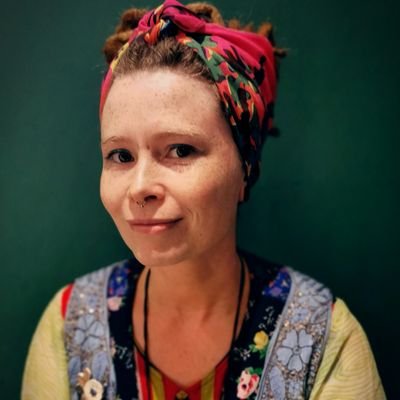 From an editors perspective: