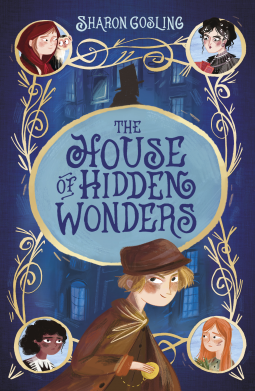 The House of Hidden Wonders

Zinnie and her sisters live in the murky tunnels beneath Edinburgh’s Old Town. They keep out of the way of the authorities and remain undetected. Until, that is, rumours of a ghost bring unwanted visitors into the caverns they call home. Among them, a young Arthur Conan Doyle, keen to investigate, and MacDuff, the shady owner of Edinburgh’s newest attraction, the House of Wonders.
Caught up in a world of intrigue and adventure, Zinnie seeks answers. But how can she discover what secrets lie in the House of Wonders while also protecting the sisters she holds so dear?

As a fan of good covers, those gold curlicues and interesting faces attracted me from the start. I hoped it would be historical – and rather spooky. By the end, I knew The House of Hidden Wonders certainly was – and about each of the characters.

Hannah Peck’s splendid cover promises a mystery involving all those people – and the story delivers in a thrilling Edinburgh Gothic manner, complete with moments of weird beauty. I don’t do spoilers in this section – but I can tell you there is plenty of heart-stopping threat, lots of courage and friendship along the way and a thoroughly satisfying end. It is scary and even gruesome in parts, and there is sadness – so perhaps not ideal for the most sensitive reader. But as an escape into a different world, (the Edinburgh of 1879 – complete with a map) it’s ideal as a break from current problems.

It has an appealing Victorian Murder Most Unladylike feel: oodles of female friendships, puzzles to be solved and great bravery. There’s the added bonus of real historical characters too – and brief, interesting notes at the end for those who want to know more. Unashamedly feminist, I’d recommend it to any reader looking for excitement and bold, adventurous characters to read about.

Where to buy The House of Hidden Wonders

This can be searched by country/continent.

From an editor’s perspective [warning – there are spoilers]

Things to look out for: