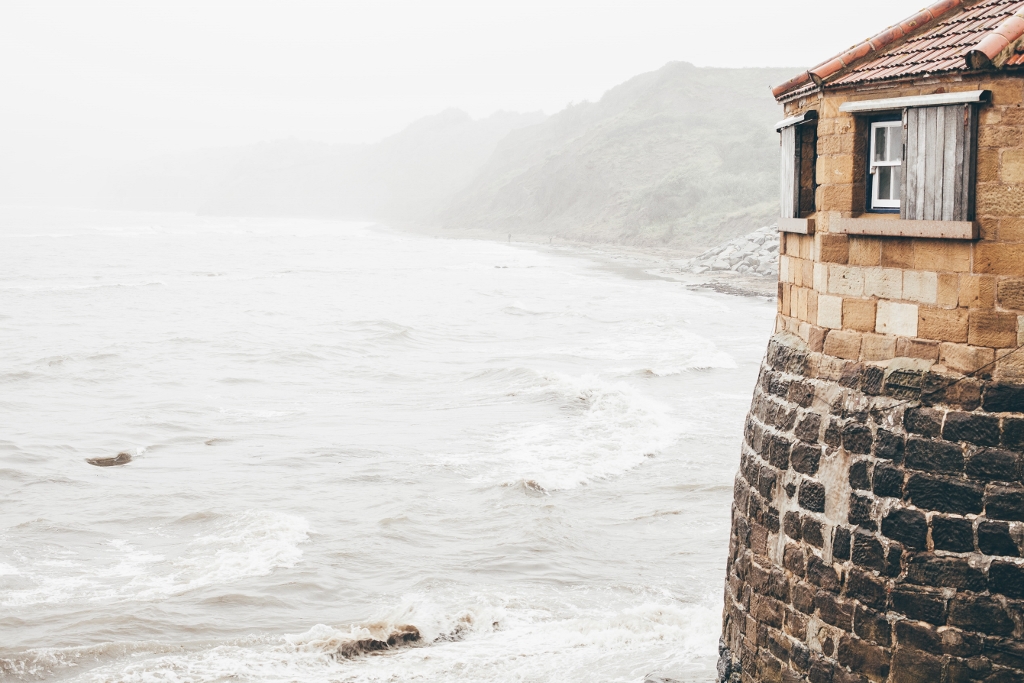 This is a tale ended in broken limpets, fractured clams and scatters of bladderwrack . . .

The next session, a line of listeners waited beside The Chapel-in-the-Sands watching a fine rainwashed sunset. The Pilgrim waited until the colours faded and led them inside. She asked the Boy with the Lopsided Grin to light lanterns and she closed her patchwork curtains.

‘This is what happened to the Gaffer and Johnny on the day of the storm,’ she began.

The dark bulk of the storm washed over the horizon and barged into Bay Town. It dashed pantiles from roofs and shook shutters till the timber split. Hail pocked upon the granite setts and rattled down the narrow loups between houses. Folk near Way Foot wrestled wooden stormguards into place before high tide. The rest hid.

Mam hurled questions through letterboxes. She battered doors till their paintwork dented. She ran faster through the town than the winds gusted. No reply. Nobdy so much as slid a window across an inch to answer.

Heavy wi rainwater and rage, she broke into the Lifeboat Station. No place for a woman but she knew where the flares were. Outside, she dragged hersel hand over hand to the launching tubes.

Twin red rockets twisted up into the rain-laden skies. The men came running. She bellowed into their faces. ‘Where’s the Gaffer and where’s my Johnny?’ Stern as a boulder perched on the cliff top, nobdy could ignore her challenge.

The smooth routine of a lifeboat launch began.

Out on their heaving coble, the Gaffer rowed. Johnny kept his eyes on a pewter glimmer ahead of them and his grip on the tiller. Brine slapped his face. The wind forced tears down onto his cheeks. He blinked and kept his gaze on strands of a particular shade of green. Both his numb hands clamped the tiller: the rudder had to gang that same road.

Johnny knew to trust. He knew the Gaffer’s story. He’d signed for the old lad to tell it over and over agin while it were engraved in him with all the beauty of the words on his father’s stone.

It were a blow like this one had sent the Gaffer scurrying back to Bay Town. He’d heard cries. Reckoned it were seals on the skerries. Then he come across a ghost net in the swell. It were tangling wi a lass, crying and wordless. Force of the waves had battered her agin barnacled rocks. She’d not a stitch left on her.

Niceties meant nowt when a body’s bleeding. Nobdy else were round, anyroad. He’d steered close and snipped the clinging lines. He’d shifted his sparse catch and all his gear to the seaward side of the coble for a counterweight, then gone to heft her aboard. One glance at her mussel-blue scales and he known her kind.

The coble bucked then plunged down the back of a great green-grey wave. The Gaffer’s story faded. Still their guide glinted ahead. The Gaffer pulled the coble up the next slope, pipe clamped in his teeth.’Keep her steady, lad, keep her straight.’

Johnny held the tiller between his forearm and ribcage. At the edge of his sight, the Lifeboat appeared.

What to do? If the crew saw, if they knew, then their luck would be gone. And worse. He clamped the tiller agin his side. He’d round the headland without stoving in the keel, nor looking full at her.

Bill Newsome’s voice bellowed over the surf. ‘Need any help?’

Wind whistled through the thorns on the headland. Crashing waves threw spume into the air. Shingle roared yet the Lifeboat engine grew louder. Now what?

A pale hand beckoned, oyster-white. She knew each runnel in the scaurs: roads to fishing grounds and safety. How she shone: the loveliest creature he’d ever seen. Finer nor all the paintings in Mam’s storybooks nor the films at the fairground. The joy of his life. They’d not have her for an aquarium nor a sideshow.

Overhead, the storm weakened. The faces of the crew became clearer. The Lifeboat were drawing closer – surely they’d spot her? The Gaffer rowed on grim-faced and gripping hard.

Whatever could he do, Daft Johnny? He could say nowt. No words. All he had were actions.

He waited while Way Foot showed straight ahead. The Gaffer could do wi’out him. He lashed the tiller in place, stood up and stepped overboard into the depths of Hommeril Hole. The Gaffer had no chance to stop him.

Seawater clamped his face with chilling pressure. It flooded his gansey. Weighted him down like a baited lobster creel. Engines throbbed somewhere, their racket dulled by cold. Nimble fingers, hard as crab claws, untied his boots. Powerful arms thrust him upwards till his chin broke the waves. He gasped. Stared upwards away from her.

Bill Newsome’s voice sounded from above. ‘Got you lad.’ Johnny splashed and kicked. They’d never notice her now. Never see the impossible.

The lifeboat crew hauled him aboard. Sure she were gone, he looked for the Gaffer. With the coble safe on the Way Foot setts, the old lad raised his pipe. A smile flashed over towards Johnny as quick as a wet fluke.

Happen he weren’t so daft after all.

10 thoughts on “The Gaffer and Johnny II”