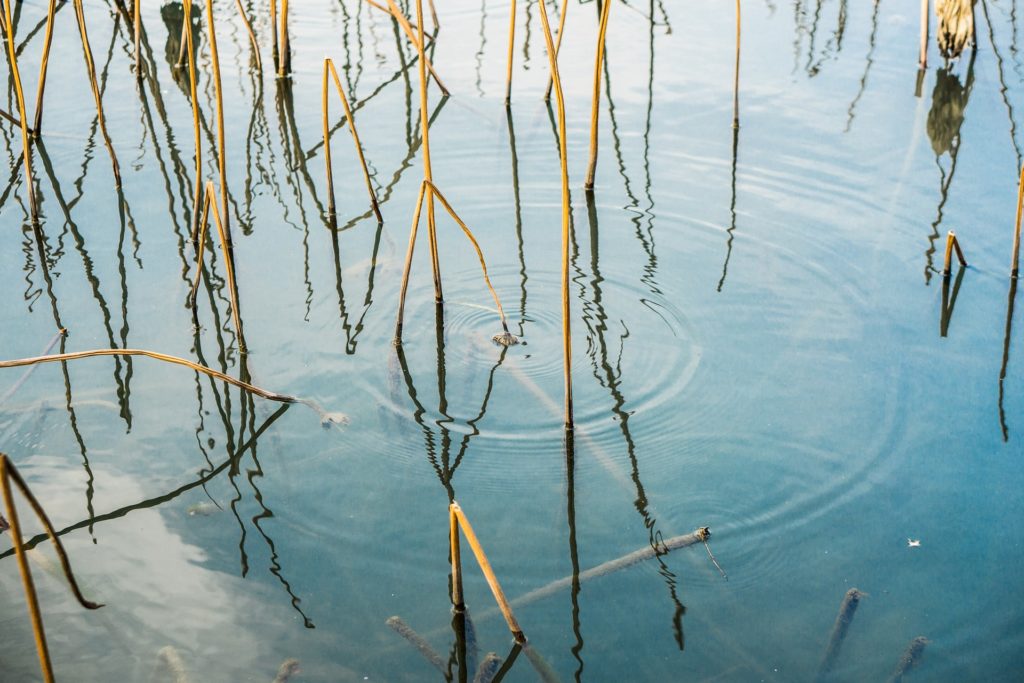 This is a tale told in lines of waterweed and the shadows of reeds . . .

Hallikeld Mere sat in a shallow oval dip, fringed with long brown reeds like a dark eye. Peat stained the water tea–brown. It turned the swimmers’ arms orange, and their legs disappeared into the murk. They dumped their clothes in rough heaps on a stony little beach beside a lone tree.

spaceTommy guarded the clothes in the shade of the hawthorn. Its crown bent over him, leaning away from North Sea winds. Coins studded its long, twisted roots, many green with age.

spaceMattie undressed last. He sat at the edge of the beach by a thick patch of sedge. A good place to keep his feet hidden. He slipped into the cool brown water and swam away from the lads larking about in the shallows.

spaceA whirr like a fast watch flittered by. A large dragonfly darted to the far bank. It zigzagged back and buzzed overhead, wings flashing. He crossed the pool using breaststroke to watch its brilliant dance. The water by the reeds lay still, dimpled by the legs of pond-skaters and glazed with reflections. The dragonfly flew away.

spaceHe floated on his back and shut his eyes against the bright sun. Lovely.Something touched his arm: delicate and cool, like long fingers. His skin flinched.

spaceHe settled back in the water, sunshine glowing pink through his eyelids.The touch came again.

spaceHe rolled over and looked into the shadowy water.

spaceA pale face looked back. Calm. Welcoming. A water-woman with skin like church marble. Green hair spread in the water. Her slender fingers clasped his arm and words passed into his mind as easy as his own thoughts.

space‘Accept your gift,’ she told him. ‘They need you on the land – and in the water.’

spaceShe pushed herself away and disappeared in the dark reeds. He moved to the sunshine and shook his head. Whatever did she mean, sea-wife’s child? Water span off and fractured the surface of the pond in a wide arc. He held his arm up. It felt printed with cold: the skin she’d gripped glimmered like dragonfly wings. He rubbed at the slime and it vanished. The words she had written in his head would not wipe off. Accept your gift.

spaceHe swam back to Tommy and said nothing. What could he say?

spaceBack at Nab House, the biggest high tea he had ever imagined filled the kitchen. Yet Grandma was adding more food to the dresser. A pair of glasses dangled from a chain round her neck, tapping against her pinny as she found places for pastries and fairy cakes. She put her glasses on and beckoned.

space‘Let’s have a look at those hands then.’

spaceGranddad popped tomatoes into a colander and got out of her way. She pulled Mattie by his wrists to the sink. He climbed onto the bottom of a step stool and she turned his hands over. She looked front and back, tutting at the state of his nails and peering at the skin between his fingers.

space‘Any itching – here down the sides?’

space‘No, Grandma. Can I wash my hands missen now?’

spaceShe stood back a bit, then gave him the brush. She turned to Granddad. ‘Looks like he might need a trip to the barbers sometime soon.’

spaceTommy hung his coat up and headed towards the table. Grandma spotted him. ‘And we’ll have a look at yours and all, Tommy.’

spaceStraight after tea, Grandma started siding the pots. He went to help, but she shooed him away.

space‘Go on – off you go set Tommy on his way – I can fettle this easy enough. We don’t want his mother fretting.’

space‘What are you smirking about, Tommy?’

spaceTommy paused then recited, ‘It’s for me to know and you to find out.’

spaceMattie took a swing at his shoulder. Tommy ran off home laughing.

spaceOn his return, the kitchen table lay empty barring an envelope addressed to him, and two large brightly wrapped parcels. Grandma put the last few cakes in a tin.

space‘What’s this in aid of, Grandma? Birthday tea and presents.’

spaceShe put the lid on the cake tin and took it to the larder.

space‘All your deliveries, lad – made a big difference. We’re straight for this quarter all thanks to you.’

spaceMattie couldn’t think of a thing to say. He fiddled with the envelope; looked at the address in Dad’s scratchy handwriting. Inside he found a birthday card with astronauts on it and a book token.

space‘That’ll come in handy,’ Granddad said. Mattie left the card flat on the table and pulled the parcels closer. They were both lumpy cylinders wrapped in crumpled paper spotted with stars, comets and ringed planets. He started on the bigger one first. Three adjustable wooden legs, lacquered and shiny with brass fittings, soon poked out of the bundle.

space‘Tommy helped to make that tripod. We weren’t right sure if we’d have it done on time.’

spaceHe had a good idea what the smaller one was. The parcel felt heavy enough, and he smelled a faint hint of Brasso.

space‘I give it a polish so it’d look as good as new,’ Grandma said.

spaceThe telescope was hardly Space Age but even from the kitchen window, far-off Jordan Rocks showed spiny and sharp. It shut smoothly and the mottled leather round the outer draw felt warm in his hand.

space‘Thank you. Thank you very much.’ He couldn’t quite look at them. He’d allus wanted a telescope.

space‘Will I give you a hand setting it up in your room?’ Granddad asked. Mattie nodded, too pleased to speak.

spaceUpstairs, Granddad held the tripod steady and Mattie mounted the telescope on its stand. ‘Tommy put corks on the feet – stop your Grandmother mithering over the floorboards. This room should be grand – they used to keep a watch on the smuggling from here years ago. Din’t stop the locals, mind.’

spaceMattie looked north to Hob Wyke and beyond. The jollity faded from Granddad’s voice leaving softness behind.

space‘I’ve put yon skin at back of Hob Hole. It’ll be safe there while you’re ready for it.’

spaceGranddad’s hand rested on his shoulder for a moment then he left. Mattie did not look up. He had no idea, would have no idea what he needed a skin for.

8 thoughts on “The Secret of Scoresby Nab Episode 21”