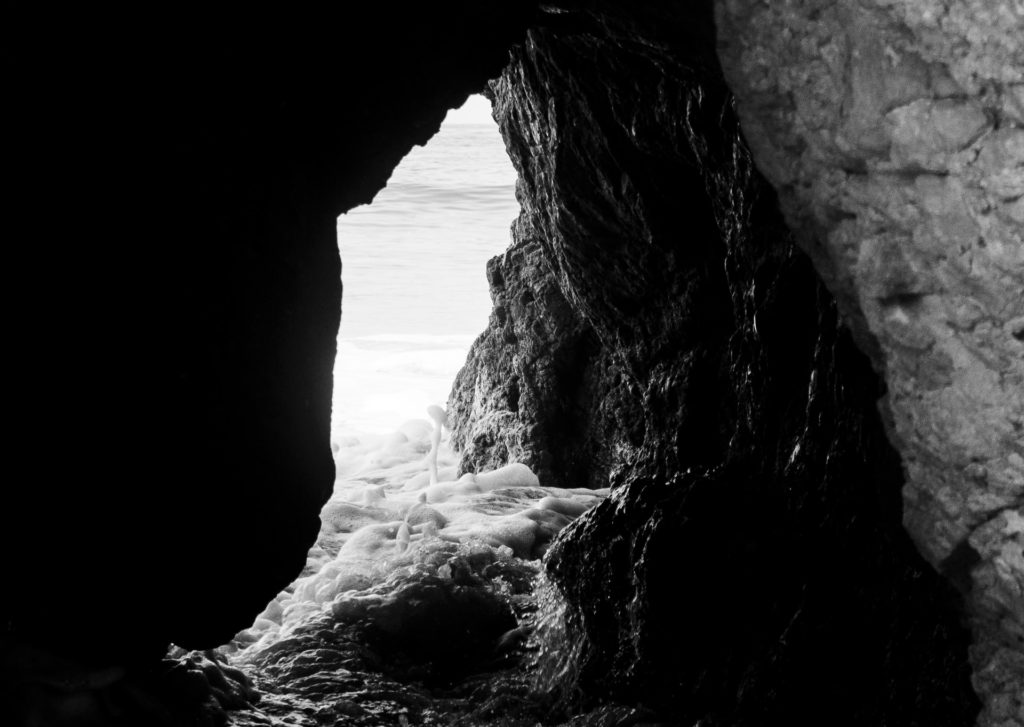 This is a tale told in rippling cave water and silvery fur . . .

Next morning, faint pearly light flowed like mist into Mattie’s room and woke him gently. He followed it to the north-facing window and took in a deep breath of sea air. He leaned out and looked down on Hob Wyke. Last night’s chimney smoke hung like spider threads over the village, the wind was that still. He grasped the window frame and leaned out further.

spaceNought moved. Too early for gulls to ride the thermals. Nobody fishing on the scaurs. The high tide crumpled into white fringes and sent up a soft hissing. Mattie tried the telescope.  At the waves’ limit, sanderlings chased and fled from the water like wind-up toys.

spaceHe remembered Granddad’s words from last night about the cave and made up his mind.

spaceBreakfast done and the back creel packed, he dashed past the busy harbour and up the Lifeboat Steps. First off, he carted a batch of Fat Rascals around to Fernlea Guesthouse. Then he hied along the back of Kirkborough to drop off scones and teacakes and fruit pies. The sooner they went, the sooner his time was his own. On a hot summer day, nobody would notice a lad exploring a cave.

spaceScoresby Sands heaved with trippers. The tide started to come in, and they all squashed together. Babies screamed, transistors gave off different tinny tunes and dogs kicked up sand onto picnic rugs. Hob Wyke kept quiet. The sea scarcely moved, edges fraying into small lace on the rocks. No ice creams, no amusement arcades and no tourists. He headed down towards the cave.

spaceBright flashes of gold winked from the shore. A man in a suit picked his way across the boulders. His pocket watch reflected the sun like a signal mirror. His shiny shoes didn’t grip well, and he had to steady himself with a broad hand splayed against the cliff. He reached Hob Hole and looked round.

spaceMattie stood still. What was he doing there?

spaceThe butcher went into the cave. Mattie watched for a while then shut his eyes against the heat and glare. He waited then opened them. Hob Wyke looked faded like a postcard left in a window. Pale and empty.

spaceThe colours seeped back in slowly. Blast. Somebody else was creeping along the base of the cliff. Somebody in white, all blown up like the Michelin Man. He wasn’t wearing his apron, but it had to be Ice Cream Joe. No-one else did a floating waddle like that.

spaceIce Cream Joe reached the cave. He popped his head in, gave a nod and then disappeared into the shadows. Mumbles of conversation floated across the bay but the words melted into each other. After a short while, the men left separately. Whatever was that about?

spaceThe sea lapped at the base of the Nab and Mattie scrambled over the scaurs to the cave. Its mouth glowed jade-green and mysterious. Ripples reflected on the walls and roof, waving like a breeze through barley. Pools of water swelled and dipped in a slow rhythm. It was a stretch to get from one rough stone column to another. He went further and further in, half climbing to avoid the rising water. Dark stripes fringed with weed showed how high the tide reached.

spaceOn a shelf above the highest weed, a package waited for him. He pulled the package down and untied the string. The fur on top of the bundled sealskin glimmered silvery grey. His fingers sank into its softness and disappeared. He flipped the skin over and straightened it out.

spaceA musky scent rose above the fresh fishiness of the cave. He leaned down, shut his eyes and inhaled. His cheek touched the dry fur, and it tingled. He pushed the side of his face down into the fur and breathed in. He fell headfirst into a warm, dark dream. He hugged the skin to him and rubbed it along his nose. So soft, so soothing. Like the trim on his parka Mam had sown.

spaceWith a jerk, he pulled back and opened his eyes. The cave dazzled with white light, bleached and unreal. His face prickled and shivered. It felt raw and exposed. The feeling spread like a chill until all his skin quivered. Only his hand felt right – where it touched the skin.

spaceThe sound of waves rose and fell like calm breathing. He let the rhythm steady his jitters and picked up the skin with both hands. The fur rippled and shimmered. A pattern of spots bloomed through the silver guard-hairs. He put the sealskin round his shoulders and waited.

spaceNothing happened. He closed his eyes to feel more clearly. Cold air stroked his bare skin. The water crept up and down his ankles, pushing and pulling lightly as the waves came and went. A sound of rough breathing echoed round him. His eyes flicked open. Everywhere the skin touched, his skin glowed with warmth. A few cold draughts poked into the gaps here and there. The gaps grew smaller and disappeared and the skin gripped him tight.

spaceThe warmth soaked into his bones. His fingers stretched; the skin was pulling them into place. His toes ached then felt suddenly right. His whole body strained. Heat and blood rushed everywhere. His lungs swelled, and he took a deep breath in. It was like getting off the roundabout too quickly. The cave disappeared into blackness and stars, and he fell over.

spaceHis sight came back, and he tried to get up. The swash and the pebbles wouldn’t let him get a grip. He looked down. Claws scrabbled at the cave floor. His claws. They grated against the rock and set his teeth on edge. He pushed with his back limbs and pulled with his stomach muscles till they ached.

spaceHe lumbered across the rocks and slid over a shelf of seaweed into a large rock-pool. The chill spread through his body and washed his feverishness away. His nostrils shut, and he sank down. A slight ache moved through his jaw and the sound dimmed. His ears had closed.

spaceIn front of him, a channel headed out to the scaur end. The electric tickle of his whiskers told him he could get through the gap. With a swish of his back limbs, he slipped out of the cave.

spaceHe followed the channel to the open sea, his arms clasped to his sides. Even a tiny movement with the flippers made him spin. He could barrel roll and turn somersaults and do loop–the–loops. He came up with a snort and a bark of a laugh. It rang off the cliff and echoed.

spaceOh heck. He’d best quieten down. He floated upright and patted his smooth, hard flanks. All muscle. He spread his front claws out in front of him. They could do some right damage. He looked at where his feet should be and fanned out his toes. His webs were fine here – they made broad, powerful fins. It was all grand.

spaceA shadow darkened the water. He was being watched.

12 thoughts on “The Secret of Scoresby Nab Episode 22”