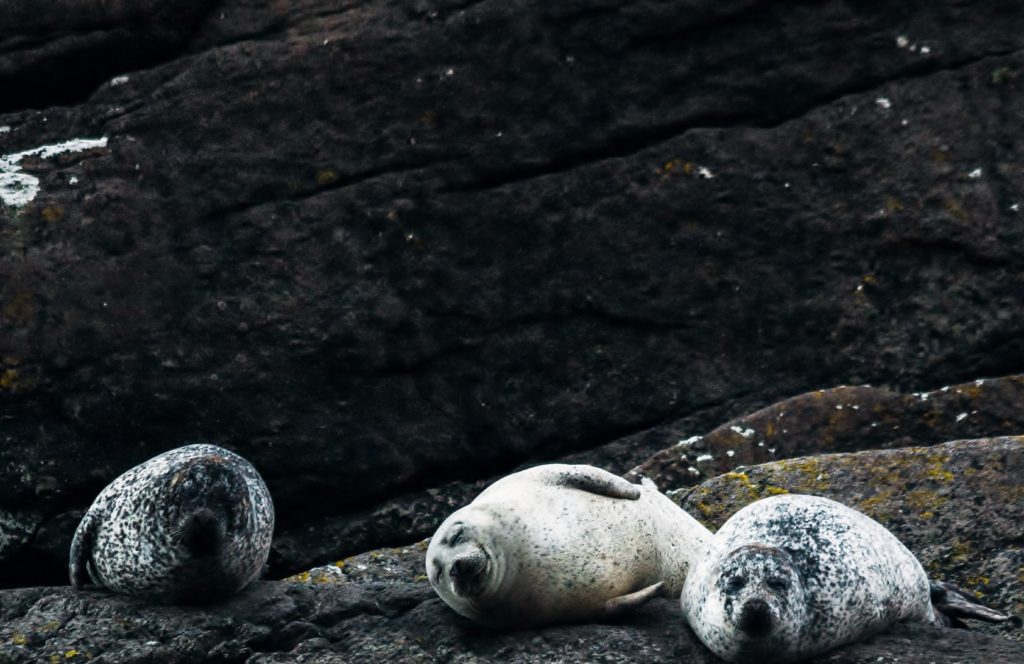 This is a tale told in the slosh of waves against cliffs, the cries of kittiwakes and a clatter of falling stones . . .

Mattie hung in the gently heaving water, aware of inquisitive eyes at the edge of his vision. A slight turn and he felt a warm puff of air on his cheek. The spotted seal gave a sniff.

spaceHe dipped his head under the water. A loose piece of tangleweed waved about on the seabed and he flipped over to get it. So easy; he was down and back again in no time. He held it out, eager for a game.

spaceThe seal shook its head. It gazed out to a distant reef then turned back to Mattie, eyes bright with challenge: Jordan Rocks. Mattie nodded.They sped off, side-by-side. The spotted seal was holding back, pacing him. He gave a flick of his back limbs and raced in front. He shot along, blinking his eyes against the rush of water.

spaceHe flicked harder, spreading his toes and pushing with the webs between them. His muscles moved up a gear and it felt good. He passed his rival then hit a kelp bed. The water dragged on his sides, warm and green with algae. Jordan Rocks disappeared. He bobbed up to the surface. Not far.

spaceHe swam off, getting the hang of the rippling movement. The kelp parted and his rival waited on the sea-floor. It snorted a brief stream of silver globes into cold clear water and then span away. Mattie followed.

spaceWater surged around a dark jagged shape ahead. Bubbles swirled in strings as each wave hit the reef. He put a spurt on. He swam and swam till his muscles scorched with effort. He passed the seal in the swash and headed for the reef.

spaceHis claws touched a ridge of stone and he shot straight up, eager for breath. No sign of the other seal – he’d reached Jordan Rocks first. He grinned. A breaker shoved him sidewards and he gulped down a mix of air and spray. He shook the salt out of his mouth and spat. The seal came close.

spaceTheir whiskers touched. A shock flared across Mattie’s face.That was well done, he heard in his head. But it wasn’t his thinking voice, it was someone else’s. Slower and somehow darker. A male voice.

spaceHe stared at the seal. Water dripped from his whiskers and Mattie felt it twang his own like a guitar string. The other voice spoke in his head again. That was a good race, I think.

spaceMattie backed off. Their whiskers came untangled. ‘You can hear me?’

spaceNo reply. The seal bottled for a moment and came closer. He clapped Mattie on the shoulder. The deep voice flooded into his head. I have to go now. I will see you tomorrow.

spaceA ripple ran down the side of the spotted seal and he vanished in seconds.The swim back felt longer but Mattie didn’t care. He belonged in the sea – and now he had a friend to share it with.

spaceMattie reached Hob Hole and waited for a wave to lift him into the half- submerged cave. He hoicked himself out of sight from the entrance. How to change back? His breath echoed off the walls like a wheezy old dog. Shutting his eyes helped. He dug one claw just below his chin and the skin began to peel off. He shook and wriggled and dragged himself to sitting. Every muscle ached and his bones felt heavy. He pushed against the rock and came to standing. He swayed for a moment, dizzy.

spaceThen he rolled the skin up and wedged it on the rock shelf out of the reach of the sea. His muscles shivered; he felt cold and wet and hungry. He dressed quickly and felt in the pockets of his shorts. A bit of change lurked in among the old toffee papers. Chips, that’s what he had a fancy for. He rubbed his arms and legs then clambered to the entrance of the cave, trying not to splash too much. He peeked out. Hob Wyke stood shady and deserted. It must be afternoon.

spaceThe streams of day trippers huffing and puffing their way up the bank held him up. A sudden movement caught his eye. Someone was waving in big wide arcs – and grinning broadly. Tommy. Who else? Mattie paused then scooted off towards him.

space‘Old Man Marflitt let you off early then?’ he asked.

spaceThe two lads rocketed across to Saltergate. A short queue waited outside the fish shop. He turned to Tommy and held his money out.

space‘Come on –stump up and I’ll do the reckoning.’

spaceTommy dumped a clutch of loose change straight on top of his. Mattie shook his head.

space‘Good job I know how much I had in my pocket.’

spaceHe checked the dial outside the fish shop. It showed fish prices according to what the Tindall brothers had caught that day.

space‘We can run to one large haddock and two portion of chips between us – d’you want scraps?’

space‘What you been doing today, Mattie?’

spaceThey moved out of the way to let folk come past.

space‘Nought much – errands for mi gran and hanging about. Bit of swimming.’

Oh, and turning into a seal. His mouth refused to say that. They reached the counter and Mattie gave the order.

space‘Well, you can keep it away from my half of the fish. Disgusting stuff.’

spaceThey took their steaming bundles down to the fish dock and sat beside the Lifeboat Station. A couple of herring gulls hung about, skittering near and then backing off every time someone passed by.

spaceTommy stopped chomping.‘I’ve a half day tomorrow – we could go off somewhere. What d’ you reckon?’

spaceMattie shoved an extra-large chip in and studied the tide times on the Lifeboat Station wall.

space‘I’m not sure,’ he said, when he’d finished chewing. ‘Depends what errands mi gran sends us on. How about we do some flither-picking when tide’s out?’

space‘Furzedale Scaur’s the best at the moment, I reckon,’ he said after some while.

space‘Right then – see you tomorrow.’

spaceMattie shaded his eyes and squinted up at the clock tower.

space‘I’d best get back – Gran’s a proper tartar if I’m late for tea.’

spaceHe crumpled up the newspapers and shoved them down hard in the wire litter basket. He gave Tommy a brief wave and set off uphill.

spaceNo need to tell your friends everything.

Next day, he read Grandma’s list on the hoof, heading down the steps. Din’t look too bad – usual deliveries for the regulars. A double hoot sounded in the distance: the Scoresby Flyer starting the incline. He thought of the pistons labouring up the hill and set his mind to beat the steam train into the bay.

spaceAt Fernlea, the housekeeper came out with her pink apron half tied and her hair like bird’s nest. Not a good sign. She faffed over checking the order and insisted on arranging the fancies on their doyleys as he waited by the kitchen door. She fossicked round in three drawers before she found her new list. He kept his smile stitched on. They couldn’t afford to lose the trade.

spaceHe headed back toward the harbour. Puffs of steam drew closer to the station. The black and spiky minute hand on the Harbourmaster’s Clock jerked past the industrial cobweb of its face. He’d still some time left.

spaceThe sea was ebbing on a spring tide and there’d be plenty of rocks to pick over. A few dark blobs caught his eye. Seals – too far away to tell their markings, though. They were heading round the Nab, going by their wake. He might spot them on the other side.

spaceThe empty basket creaked on his back. Mr Bedlington pulled out of his way as he shot up the steps. He grasped the drystone wall around Nab House. The steam whistle echoed across the bay: he’d done it.

spaceHe called round the kitchen door without taking his boots off. ‘I’m off now, Grandma – the new orders are on top of the creel.’

spaceHe dumped the basket in the porch and hurried down the cliff path. On the second hairpin bend, he gave Furzedale Scaur a glance. The seals were there. Three of them hauled out on the boulders; a large grey one and two light-coloured smaller ones.

spaceA clack and an echo rang out on the scaur. The seals looked towards the shore. Then another louder clack and the seals flinched. A volley of stones clattered onto the rocks and hit the seals from all angles.

spaceMattie hurtled down the path. Flaming day-trippers. What ever made them do such a thing?

spaceAt the next bend, he skidded to a halt. He saw who it really was. His feet dislodged a scatter of rocks. First, they bounced over a fringe of grass and down the cliff. Then they landed in a noisy cascade and made the thrower turn around.

spaceTommy waved. He bent down and selected a large stone with care. He lozzed it and hit the larger seal. The seals splashed into the water and disappeared.

spaceMattie reached the beach, flustered and too out of breath to yell That could have been me at him. Anyroad, Tommy had turned away, fossicking around in his coat pocket.

space‘Hold your hosses, Mattie, we’ve plenty of time. Here, have some spice – I’d a tuppenny tip off a lady from Leeds yesterday.’

spaceHe held out a crumpled bag of Yorkshire Mixture sweets. Mattie kept his head down. He didn’t even want to look at him. How could he?

space‘Get a move on – my arm’s dropping off.’ Tommy waggled the bag.

spaceHe pulled the top bucket out of a stack of two. A knife rattled inside. He picked it up and moved away down the scaur. He bent and levered and flung the flithers in the tin bucket with an angry clatter. The sound of Tommy’s bucket grew farther and farther away. After a good half hour, Mattie looked out to sea. Not one dark shape bottled in the water and loneliness fell on him like fog.

spaceThe bay grew quiet. Tommy waved and pointed at his bucket. Mattie hauled his own over to Tommy and checked the level of Tommy’s catch.

space‘You’ve beaten me,’ he said, ‘That’s at least quarter more than I’ve got.’

spaceMattie bent his head and stared down into the mass of limpets. ‘Here, you know the seals. D’you reckon you could leav’em alone, eh, Tommy?’

spaceHe prodded the bucket with his gumboot and waited.

space‘Everybody round here hates’em on account of the fish,’ Tommy said, ‘but if it bothers you . . .’

spaceMattie looked up and gave a firm nod.

spaceTommy never lied. The plan had worked – time for a small celebration.

space‘Now then, how about that humbug?’

Header image adapted from a photograph by Amadej Tauses on Unsplash

10 thoughts on “The Secret of Scoresby Nab Episode 23”