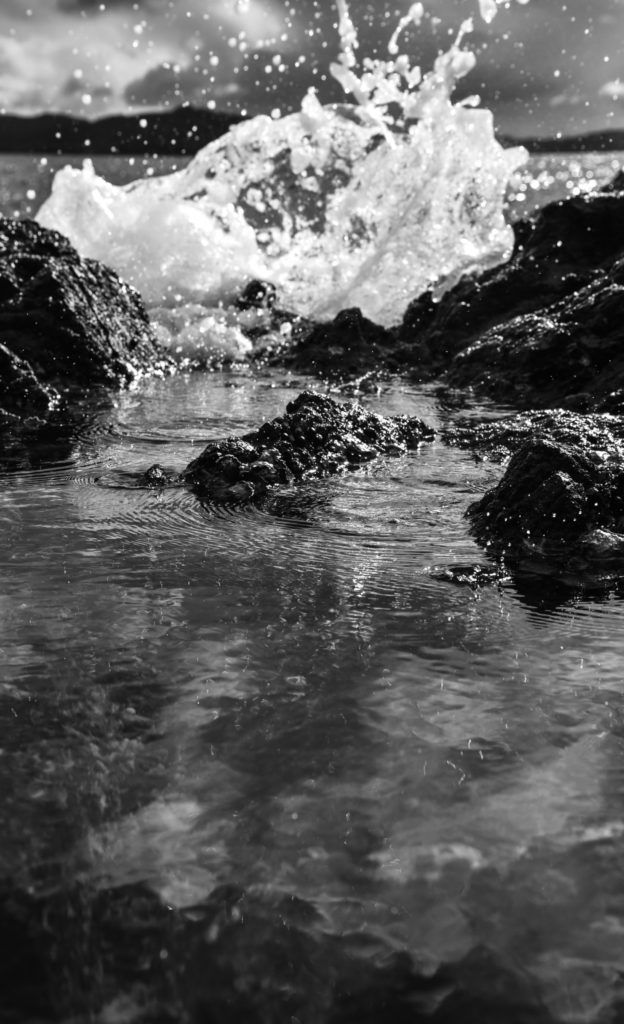 This is a tale told in bladderwrack and tangleweed, lost nets and sea-washed reefs . . .

Mattie and his seal friend passed hours in a cloud of fun. Hide-and-seek amongst the swaying stalks of tangleweed. Ambushing each other in the gullies. Blowing bubbles under floating puffins and giggling at their orange feet paddling away.

spaceOver a large black reef, scattered with boilers, metal plates and winches, Mattie paused. How many ships had sunk there? With a tiny fillip of his ankles, he dived to one wall of wreckage and peered through a hatch. A conger eel drew her muzzle back and then ribboned across the dark in a blue-grey line.

spaceHe snouted around in a scree of broken shells, flakes of rusted metal and pebbles. He nudged starfish and sent queen scallops clapping away like pale castanets. An angry spider crab rose on its back legs. It waved pimply claws and went for him. He laughed, snorting bubbles out of his nose. His seal friend passed in front racing after a striped fish. He turned to follow.

spaceThe rocks dropped away in an underwater cliff. At the top, a few fronds of tangleweed waved about in torn banners. Further down Dead Men’s Fingers jutted, pale and fuzzy. Every trace of colour and light sank into the shadows below. He hovered on the brink of nothing.

spaceHe raised his head. Not going to sink. The water would hold him up – wouldn’t it?

spaceAbove the bay, the weather faired up. The last of the clouds melted into the blue sky. Sunlight glittered on the waves, then fell in great broad stripes. It lit up a small outcrop far in the distance.

spaceHe launched out into the nothingness. Flew. Then caught up and tugged his seal friend’s fin.

spaceCome on – I’ll beat you to that rock. Last one there’s – a jellyfish.

spaceBe careful – it can be dangerous… his friend warned.

spaceHe sped off and dashed over scaurs that lay dark and wrinkled like dinosaur skin. He darted low over banks of light smooth sand, and flat fish scarpered in puffs of silt. He threaded through the tall stems of a kelp forest, then came out of its shadow and halted.

spaceA strange haze hung in the water in front of him. Its long mist draped like a curtain across his view. Odd shapes writhed in it, and the whole thing rippled. A drowned cormorant made a black crossbow in one spot. The carcass of a dogfish drooped in another; its blank eye large as a plum. Remains of birds and fish hung all along its pale length. A ghost net.

spaceThe tail of the ghost net dangled over the abyss, snaking down to the darkness. It shook; thrashed from side to side then juddered. He tipped over and swam down. Something was still alive.

spaceThe weight of water held him tight in the cold and dark. It wanted to squeeze him empty of air and leave him to drift down with the whalebones and the by-catch and the marine snow to the seabed. He was a creature with air in its lungs and he should not be there.

spaceRage shook through the water and along his side. Something alive fought to be free. He forced himself further down into the gloom. Every bit of common sense yelled at him, told him to get out.

spaceHis jaw brushed against sleek fur in the murk. Emotion jolted through him like licking a battery. It flooded his head with fear. He pulled back and squinted into the almost-dark. A shape twisted and squirmed, its features contorted by the netting. The face of a seal.

spaceMattie tugged at the net, and the mesh stretched. His friend struggled. Mattie slashed at the tightening nylon and it snagged on his claws. The threads cut into his skin like cheese-wire. It would not break.

spacePain in his ears warned him they were sinking. He took hold of the net with his teeth and swam towards the surface. Tastes of fuel oil and death made him gag. Corpses dragged in the current. Such slow progress.

spaceHe couldn’t hold his breath any longer. He had to let go. His friend’s eyes glistened, then closed. Mattie thrust against the water and shot up to the surface. He leapt up, caught a great breath in and headed back down.

spaceIt was hard to see the ghost net. He shut his eyes and tuned into his friend’s struggles. A faint movement drew him deeper into the open sea. He swam downwards, but the water pushed him back. He turned completely upside down using his weight to descend quicker. The water resisted. He looked for the net. Twin circles gleamed up at him, eyes round with fear. He thrust down as hard as he could. The air in his lungs dragged him towards the surface.

spaceHis friend squirmed and swam up a little. Their whiskers touched in the darkness.

spaceBreathe out Mattie heard in his head, Breathe out or you will never get down.

spaceHe bared his teeth and let his breath drizzle out. He sank till he was level with his friend and bit into the net. He rived and tore at it with his claws, ignoring the strands caught between his teeth. The nylon cut into him. He let it. He let his blood flow into the achingly cold North Sea and kept going. The seal was unconscious. A collar of ghost net clasped his scarred neck. Mattie snapped the last strand free and pulled him upwards. So much dead weight.

space At the surfacem small waves slapped and spurted up against nearby rocks. The tide was dropping. The dries emerged in swishing seaweed, leaving smooth patches he could clamber on. He hung on to his friend’s collar of net and waited.

spaceMore of the scaur emerged. He felt for the power of the waves. A huge roller stacked up and he let it wash them onto the nearest landing place. He flopped down and held his burden on the rocks. A sudden fierce cry rang in his ears.

spaceA large female seal lumbered towards the water. A long scar down her side rippled like oil and sunlight flashed off her sharp teeth. He backed away. Her mouth opened wide, and she grabbed the motionless seal by the scruff of his neck and hauled him farther onto the rocks. She pummelled his flanks with her head; he made a sudden spout of seawater and then sucked in air with a terrible wheeze.

spaceMattie tried to scramble onto the outcrop. The mother seal would not let him near. She yowled and snapped. He pulled back and waited. He let a few breakers fall, then inched forward. His seal friend lifted his head, then gave it a shake. Salt flew off his whiskers. He was alive! With a lunge, the scarred seal put her bulk between them. Mattie let himself be swept back into the sea then headed to shore.

spaceHe did a lot of thinking on that long slow swim back to the cave.

10 thoughts on “The Secret of Scoresby Nab Episode 25”