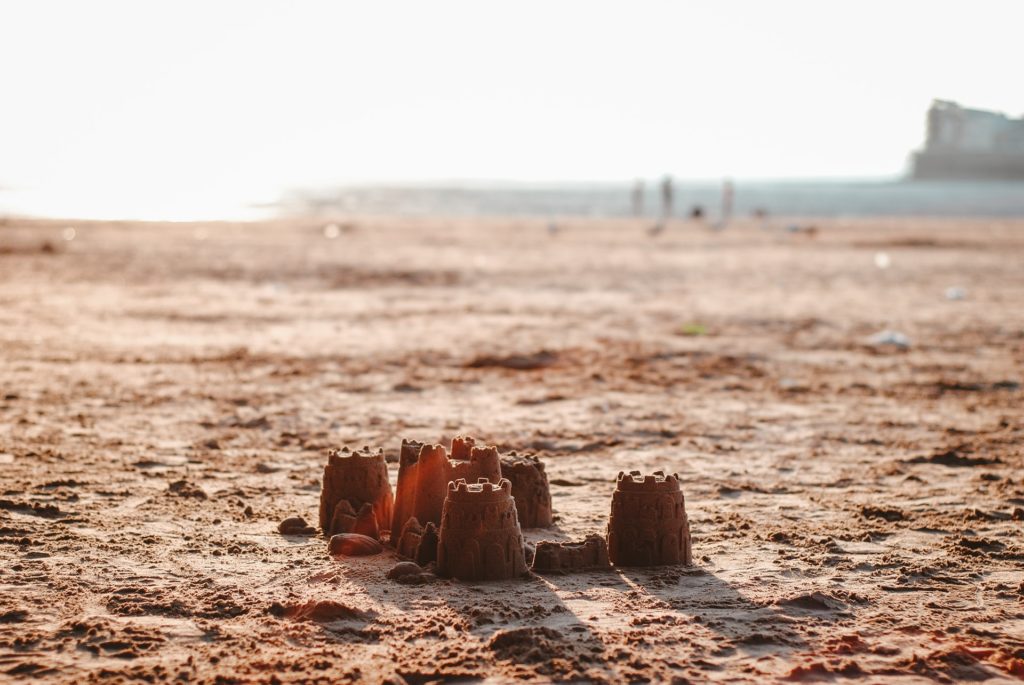 This is a tale told in spade-sculpted sand and rows of seashells . . .

Mattie glanced at the kitchen clock. Teatime soon and he still hadn’t asked her. He stopped shucking peas for a moment and turned to his grandmother. She wouldn’t hear him over all the pops and plinks.

space‘Grandma—why do I allus have to cover my feet up? What’s wrong with them?’

spaceShe finished crimping the edges of a gooseberry pie before she spoke. Her tone of voice meant business.

space‘Just keep’em hid, that’s all you need to worry about – not why.’

spaceShe picked up a sharp knife and briskly sliced off some dangling bits of pastry.

space‘Do you want to be picked on again?’ she asked. ‘It’d be worse nor Lawefield round here.’

spaceThe pie landed on the table with a thud. He’d no answer to that. Back to his shucking.

spaceHe popped a long pod, pushed the big round peas into a pan with his thumb, and left a few thin baby ones in the pod. He bent forward a bit and ate the sweet little spares, then dropped the empty pod into a colander on the floor. A few more and he had finished.

space‘All done,’ he said and set the pan aside.

spaceShe looked up, shaping the spare bits of pastry into a circle by touch.

space‘Job’s not done till the tidying up’s done,’ she said, then piled currants, mint-leaves and sugar into the middle of the pastry.

spaceHe picked up the colander, ready for the compost, and went to the door. He paused on the threshold and turned towards the kitchen table.

space‘Was it mi mam I got my feet off?’

space‘Aye – and much could they’ll do you.’

space They help me swim, he thought but said nought.

spaceShe flung water from a dainty jug on top of the small dark heap of fruit. She watched it soak in then folded the pastry over. Then she rolled it flat one way.

space‘But what really happened to my mam – and why did my Dad leave here?’

spaceShe stood still. She set the rolling pin down and dusted her hands off on her apron.

space‘You’d best get shot of those pods and come sit down -’ she began.

spaceA deep singing voice washed across the garth and into the porch. Bound for South Australia swept through the open door. She waved he rolling pin.

space‘Look sharp – your Granddad’s coming and he’ll be wanting his tea.’

spaceShe bent her head down and flattened the pastry. Another time then. At least she’d meant to tell him.

Next day, Scoresby had disappeared. No sign of the bay, the town, or the cliff edge. Even the sound of the sea had gone. His window opened out onto mist and nought else. The smell of bacon drifted upstairs and pulled him away to the kitchen.

space‘One or two grilled tomatoes for you, Mattie?’

spaceGrandma served Granddad and then Mattie.

space‘Back creel’s all packed ready for you – and you’ll have to take a basket and all. We’ve orders from the Hope and Anchor.’

spaceMattie groaned on the inside: more steps to climb before he got his freedom.

space‘Eat up and get off. The more business we get the better, young man.’

spaceHe waded through small ghosts to the harbour. Mist swished against his bare knees in cold damp clumps and hung about the paths. He turned onto Bay Bank and held his face up to the sun. It gleamed like a lucky silver sixpence and scared some greyness away.

space‘Ey – Tommy – will you get the day off for the fog?’

space‘No chance – this bit of a fret – it’ll blow away in half an hour.’

spaceMattie thought for a moment.

space‘What about dinnertime – can we hitch up then?’

spaceOld Man Marflitt’s crinkly face popped up over the seawall.

space‘Can you read the time, lad?’

space‘Right then –he can go for early dinner – it’s generally slack trade about half eleven –but you bring our Tommy back prompt for the afternoon. There’s charabancs coming in from Dewsbury and he’s not to keep’em waiting.’

spaceThe low cloud rolled away like grey felt and a gleam of morning sunlight washed the side of the Lifeboat Station. It dripped from the gold letters of the Lifeboat Services board and made them glow against the black gloss paint. On the Town Council Notice Board, a new poster stood out.

spaceIt might be The Flower and Produce Show. Granddad wanted to know about that. He would look later. Right now, he wanted rid of all this weight.

spaceHe set his sights on The Hope and Anchor Fishermen’s Lodge and lugged the basket up to a low and shabby building. The roof sagged over narrow dormer windows and the gutter sprouted weeds. Paint hung off in curls from the grey bare wood of the window frames and the squat front door.

spaceHe knocked. The door opened with a groan and let out smells of stale beer and fags and unwashed men. A stout woman with arms like a boxer came to the door. She folded them over a none-too-clean apron.

spaceHe held out the basket. The woman snatched at it and threw back the tea towel. She poked round, counting under her breath. Satisfied, she flung the tea towel back and made to go off with the basket. He kept hold.

spaceShe tugged at the basket.

space‘Cash on delivery or I take it back – that’s what I’m supposed to do.’

space‘You want the business or not?’

spaceA reek of over-used cooking fat came off the woman. He felt queasy but stood firm.

space‘My grandmother, Mrs Henshaw, said to wait for the money.’

space‘Annie Henshaw. What can you expect from her sort?’

spaceA Scottish voice sounded above them. ‘Give the lad his brass, will ye woman – and fry us some more bread.’ A man in a vest leant out of an upstairs window. He opened the window a little wider. Blue tattoos covered his arms, and he winked at Mattie.

space‘And we’ll have some more tea while you’re about it.’

spaceThe woman handed over the money and shoved the protesting door shut behind her. He stood back to wave at the Scotsman but he’d gone. What was that about?

spaceThe mist vanished. Brightly painted shutters came off kiosks, and shops opened to catch the early trade. Buckets and spades, little windmills and paper flags clustered round open doors. Gwen Fewster’s donkeys clattered down the cobbles and waited on the beach for visiting children. The sea went out. Castles with moats, racing cars, and complex dams and canals appeared in the golden sand.

spaceMattie checked the Harbourmaster’s Clock. Quarter of an hour left and only Ice Cream Joe’s to do – and that was right down by the front anyroad. He tightened the straps on the near-enough-empty back-creel to stop it rubbing, and hared down the steps like a fell runner. He reached the back of the café in no time.

spaceHe knocked on the back door of a new extension. A girl came out and took hold of the last cake tin and disappeared inside. He waited, the peeked round the half-open door. A new kitchen gleamed on one side and an unfinished room on the other. Ducting crossed the ceiling like flattened grey snakes. Huge pieces of steel equipment stood on the tiled floor, still in their wrappings.

spaceHe took a few quiet steps inside. An oval sign with heavily engineered lettering stood out.‘Josiah Oldfield and Nephew,’ he read, ‘Manufacturers of the Finest Fat Rendering Appliances, Sheffield, Goole and Lawefield.’ Whatever did they want that for in an ice-cream parlour?

spaceHe heard the girl return and nipped back to the doorway.‘There you go,’ she said, ‘Sorry you had to wait a bit.’

spaceShe smiled, and he shrugged.

space‘Ta,’ he said and left.

spaceHe didn’t need to check the clock again: his grumbling belly told him the time. He sprinted along the front to the roof painted Stop Here for Marflitt’s Deckchair Hire and Beach Sundries and leant over the railings.

spaceTommy gave a rueful grin and loped up the steps two at a time.

spaceThey skirted round Scoresby and clambered up to the drying ground. Tourists and day trippers never went there. Few but artists took any interest in fishing nets drying, the mending of lobster creels or painting cobles. Things rusted in the long grass, things wanting mending and things wanting forgetting.

spaceThe grass felt damp yet. Tommy took his coat off for summat to sit on. Mattie found a three-quarters-alright herring box and propped it up with an old brick. They tipped their food out on the wonky table.

space‘Ooh – you’ve got cheese, Mattie. I like cheese. I hardly ever get any cheese.’

space‘You wantin some then, Tommy?’

spaceHis face was a picture. Mattie laughed, loud as a herring gull.

space‘Go on – help your sen. Gran allus gives me more than I can eat.’

spaceThey sat and chomped through the heap of grub. Alright, this Scoresby place, Mattie thought, life’s pretty much sorted.

6 thoughts on “The Secret of Scoresby Nab Episode 26”