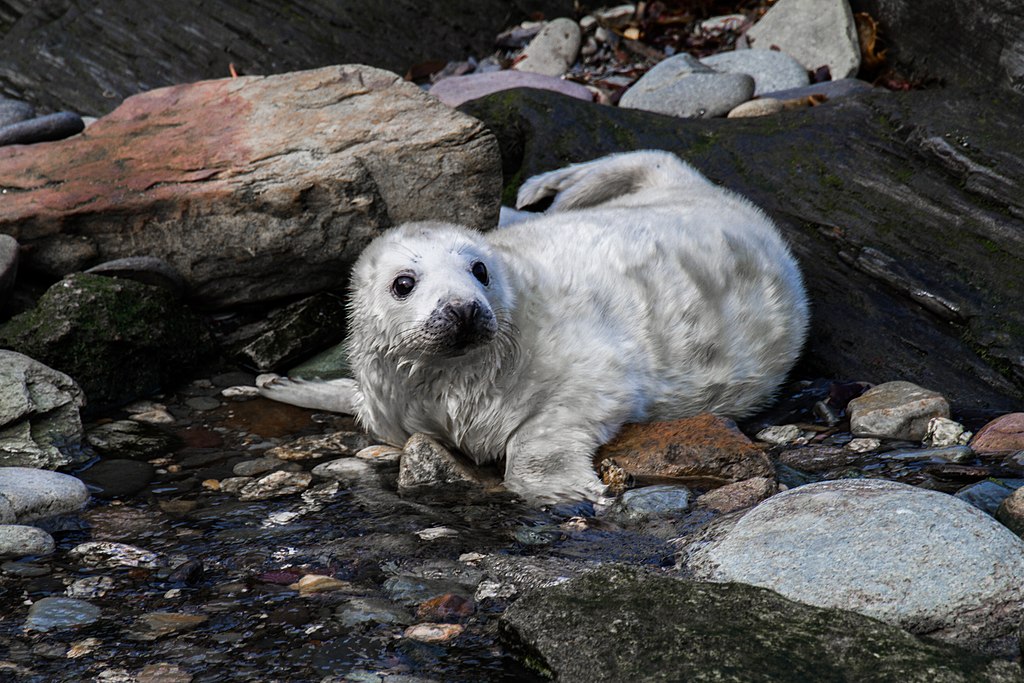 Mattie let his legs find their own escape from Grandma. They slipped on grit and his knees collided into a house wall. Further down, a mother dragged a toddler out of his road. Dogs barked and someone rang a bicycle bell. Folk shouted. His feet jinked along the narrow loups, dodging ashcans and frightening cats. His boots thumped and flabbered till his lungs were sore and he reached Hob Wyke.

spaceA moment’s breath then he leapt down from the sea wall onto the beach and dashed out towards the waves. He waded and splashed over the scaur. Seaweed slithered from beneath his feet and he gashed his knee on the rocks. He pulled off his boots and flung them away, then floundered and scrambled and crawled his way to the edge. A channel of agitated surf led out into the bay. He tore his clothes off and launched into the cold water.

spaceA hundred feet and more above, a lone figure in navy came to the edge of the cliff. She scanned the bay and then watched a small blob strike out to sea. The hurry-up bell sounded from the Meeting House but she did not move. It stopped. She stood and watched the swimmer till she could see no more.

spaceBelow the cliff, the sea thrashed across the scaur and fell back into the channels in falls of white water. It tore at the seaweed and grabbed loose pebbles to throw at the shore. It clutched at the limpets and periwinkles, failed to dislodge them, then rushed back to riot over the rocks again.

spaceMattie struggled against the currents. They pushed and dragged and bustled him back towards the shore:  a solitary boy fighting against a crowd loosed from a stadium. He swam on, flung and dropped by the waves. At each rise, he saw the colony. At each fall, he felt the tumbling shallows sandblast his skin. He didn’t care.

spaceThe seal mothers called over the roaring breakers. They moved their white-coated pups onto the highest ground. Over the rolling sea, their heads reared up on watch. Their eyes were not friendly.

spaceA wave yanked a mottled youngster towards rock-strewn gully. The pup yowled and scrabbled at the sharp stone. Another wave knocked it off like a fly. It fought against the sleek power hauling it down, then sank.

spaceMattie struck out towards it; his eyes screwed shut with effort. Poor scrap of a thing – happen he could save it. Something surged past him. The youngster yelped. A darkly spotted seal held it by its scruff and lugged it towards the rookery. The spotted seal hung on as a breaker washed over them both. Mattie kicked and swam. The sea pulled him down then hurled him at the rocks. He came up spluttering, anxious and battered.

spaceThe spotted seal was still there, with the pup limp in its jaws. A mother seal clambered down to drag the youngster to safety. It stirred and mewled. Mattie managed a small grin before the salt water poked past his lips. He spat. The spotted seal turned towards him. Urra.

spaceHe would tell his brother and he would tell the others. They would swim somewhere safe and it would all be right. As soon as he let the thoughts into his mind, he knew they were stupid. Still, he had to try.

spaceHe swam and reached towards his brother. He stretched his hand out, waiting for the waves to bring them together and formed the words in his mind. You must go. They’re coming to kill you.

spaceHis palm touched the smooth fur. Anger and fear jolted through his arm. They punched into his chest and left him panting. His heart fluttered at double speed and he had to let go. The water snatched him away from Urra’s snarling jaws.

spaceWaves closed over his head. They hissed and rushed with trapped air. He reached up, frog-kicking to the surface. He sucked in a frantic breath. Then a weight hit his side, a ball of fury pushing him away from the colony. It hit him again and thrust him into the current.

spaceHe spun round. On every part of the Nab rocks, the seals glared at him. The mother seal reared up and showed her cruel teeth. The broken body of the pup hung beneath her claws. She howled and the whole colony broke out into wails and yowls.

spaceHe covered his ears and trod water. The current took him back to the cliffs and away from the terrible keening. He crawled out of the water and sat with his back against a boulder. Hunched up, clasping his knees to his chest, he kept still as a pale rock.

spaceUp on the sea wall, Tommy’s gangling shape searched the beach. He spotted a boot and leapt down. His greatcoat flapped as he ran crunching across the pebbles. With a grin, he waded out to retrieve the other boot. He held it up and poured the water out, then began sweeping the beach with his head down. Oblivious.

spaceMattie lifted his eyes to the seal colony. What could he do? He rested his elbows on his grazed knees then pushed his fists against his temples. Still thinking hard, he picked up a flattened pebble. Its rounded shape felt cool and soothing against his scarred hands. He found more. He fondled them and passed them from hand to hand. Each one made a gentle clack as he added it to the mound by his side.

spaceHe stopped, stone in hand. He had it.He knew what to do.

spaceHe stood up and searched for more pebbles. With clack after clack, the mound grew to an unsteady heap. Another and another grew, as close to the water as he dared. He stepped into the sea.

spaceShivering, he gripped with his toes and reached back for a stone. Seaweed slithered round his ankles and the water tugged. He took aim and threw. The stone landed and bounced close by a mother seal. She raised her head, then lowered it. He threw again. He caught her pup’s back limbs and it shuffled closer to her.

space‘Go away. Leave the Nab. They’re coming to kill you!’

spaceHe shouted and threw again and again. His voice grew thick and his arms grew tired. Nothing much happened. The seals just moved away from his shots.

spaceA few seals lumbered into the water. Only a few scratting little lumps left. He gritted his teeth and moved to find another heap of stones. There was a yelp. He turned to see a mother seal rear up then fling herself into the sea. A stone whizzed over his head and struck another seal. A champion throw. The seal slid into the waves.

spaceTommy’s voice came clear and strong over the surf.

spaceHe bent down, an armful of sodden clothes clutched under one arm, and picked up a big stone. He lozzed it at the seal colony, hit one and gave a nod of triumph. He turned back to Mattie.

space‘Auntie Annie were asking after you – wanted to know where you’d gone. I’m glad I found you. Come on then – let’s go and get dry.’

spaceMattie stared. The stone slipped out of his hand and clattered on the rocks.

space‘Get lost, Tommy. Get lost and don’t ever come near me or my family again.’

space‘Look,’ Mattie held his out his hands and spread his fingers wide.

spaceTommy’s mouth hung open. His eyes flicked from side to side, looking at Mattie’s hands and the webs between his fingers. Then they dropped down to gawp at the shingle.

spaceMattie picked up the stone and went back to throwing. His shoulder burned with effort and his elbow trembled. He scooped up a handful of loose stones and launched them in a volley. They landed short, hissing into the white-tops. The next volley flew better and the seal colony began to move.

space‘Shift yourselves. Go on – shift!’

spaceThe cliffs flung his shouting back. His frown set hard and his eyes bulged with tears but he would not cry. He willed the seals to move then looked for more ammunition.

spaceHe flung the bundle of soaking-wet clothes and then the boots towards him. Mattie bent down and picked up a large, jagged stone. He straightened up and drew his hand back. He aimed at Tommy.

space‘I told you to push off.’

spaceTommy spoke over his shoulder. ‘Mist’s coming in. You’ll have to leave off soon. It won’t do any good anyroad. They’ll only come back. You’re just wasting your time.’ He strode off.

spaceMattie hurled the stone towards Tommy. It landed with a powerful whumph and stuck into the cliff side. He din’t need friends like that.

header image by Jaan Minakov, CC BY 4.0, via Wikimedia Commons

8 thoughts on “The Secret of Scoresby Nab Episode 33”