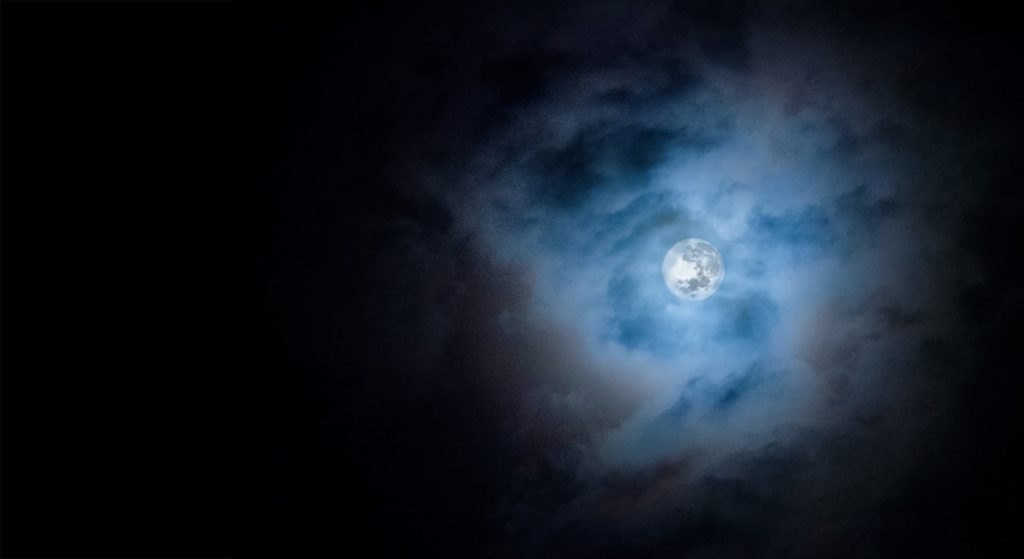 After Tommy left, a sea fret drifted into Hob Wyke. The sea calmed and mist glided over the waves in a fleet of grey long-ships. Landmarks dissolved and sounds became lost. Darkness and cold piled in afterwards and stole the afternoon away. The coast emptied.
Mattie peered into the grainy murk until his eyes ached. He gave his ears a rub, but they were deaf, plugged with mist-sodden air. The only way back was by feeling along the cliff bottom.
spaceHis soggy clothes clung to his body in wrinkles. He shuddered and edged crabwise towards Hob Wyke. The cave entrance made him pause. It gaped, and he smelled water and seaweed, damp rock and ferns, but no sealskin. Not a hope.
spaceHe fumbled his way back to the seawall. It took three goes to get up the incline. Rough concrete barked his shin, but he was too tired to even swear. He trudged up the hill, and the mist levelled out. Sunshine touched his back. The warmth made no difference. He had failed.
spaceUp by the boatsheds, men tinkered with their cobles. Precise taps from small hammers nailed clinkers back into place. Bright colours repainted names of women on twisting scrolls across the stern. They sanded by hand and talked little. A brazier glowed, fed by offcuts and driftwood. Mattie leaned against a damp wall, watching from the shadows.
spaceHis grandfather leaned over an outboard motor clamped to a workbench. The shaft disappeared inside an old oil drum. Parts laid spread out on one side like a procession. On the other side, tools waited for their turn in his patient, grimy hands. With dozens of taps and tweaks and finicky adjustments, Granddad reassembled every last piece, then wiped his hands on an oily rag. He picked up a watering can from some slats under the bench and held it out without looking.
space‘Cop hold of that, lad.’
spaceMattie grasped the heavy galvanised handle in both hands. How did Granddad know he were there?
space‘Now pour until I say when.’
spaceHe topped up the water in the oil drum until there was about an inch over the exhaust and Granddad signalled halt. Two pulls of the start cord and the British Seagull brumbled, steady as a cat purring. Granddad nodded at it, then came close to Mattie’s ear, his hand still on the controls.
space‘What’s the long face about?’
spaceDown in the oil drum, the water twisted into a whirlpool and ran dark. It shook the metal and reached up the sides in white spit. The words he needed to say would hardly come to his mouth. They hung on his lips, then fell out, harsh and bitter.
space‘My skin’s gone – destroyed.’
spaceGranddad gave the throttle a few tweaks, then stopped the motor.
space‘You don’t allus want to believe what your grandmother says,’ he said.The water stopped sloshing about.
space‘You’ve got instincts. Follow your nose, lad, follow your nose.’

Mattie went to school alone on Monday. He hung round in Dumple Court stroking Mrs Bedlington’s cat till the last bell went. He walked past Tommy and the Nab Enders and lined up right under the teacher’s gaze. She nodded approval of his shiny shoes and glossy satchel and neat school uniform.
spaceHe sat alone in class. He coloured in maps exactly according to keys and copied handwriting slowly and carefully. He wrote a nice essay entitled ‘What I did on my Holidays’ and lied in every word. It was easier to apply himself and work. Work was better than thinking.All those bent heads; the ones trying to stay unseen. How many had hair like his, feet like his, how many he had ignored?
spaceAt playtime, he was Moses parting the Red Sea. The Nab Enders moved away from him, and the others retreated to let him pass by. He tried to catch the attention of a boy with eyes like his. He’d seen him near the boatsheds sometimes.
space‘I’ve a couple of apples from mi Granddad – d’you fancy one?’ he whispered and held out a russet apple. The boy looked away and moved to the coal bunker. Mattie leant against a wall and bit into his apple, thinking.
spaceA group of girls clustered around Lorna. An older girl in fancy socks stood with her arms folded and shook her head.‘I don’t care what she’s had done – she’s still one of them.’
spaceTwo others flanked the fancy-sock girl. They held their hands out to their friend.
space‘Give over, Deirdre, let her be, she can’t help that,’said one.
space‘It were a long time back,’said the other. ‘I mean, if you’re going to get picky, there’s nobody round here who han’t got a touch of – well, you know.’
spaceDeidre stood up tall.
space‘I haven’t.’
spaceHer voice flowed over Lorna’s head, chilly as the North sea.
space‘We’re better off without them. Roll on Sunday.’
spaceShe turned her gaze downwards.‘Pity we can’t get rid of the ones on land.’
spaceDeirdre pushed Lorna hard and sent her sprawling. Mattie rushed over. He helped Lorna up and faced Deirdre.
space‘It’s not a crime, you know. She din’t chose her parents – any more nor you did.’
space‘I’m not taking that from a bloody blow-in.’ Deirdre snarled.’Push off where you belong – you’re not wanted here.’

By the afternoon, the sea fret lay thick over Fisherhead. The slates on the school roof turned pencil-grey with damp, and the mist below them settled in drifts. It shifted slowly across the playground, dividing the children.
spaceMattie searched among the muted groups. He saw Lorna standing alone and went to ask her where the kids from Hob Wyke were. She slipped away.
spaceHe carried on hunting through the blotches and banks of dirty white cloud. His nose tingled. A waft of coal smoke passed by, then a light smell of fish and something else. He followed the trail to the far corner and a small gang. He stood still, waiting for his moment. Their quiet chat tailed away to nothing. Several pairs of large, dark grey eyes looked at him. No one smiled.
space‘I need to talk to you,’ he said.
spaceTwo of the lads looked down at their boots. Another shrugged.
space‘It’s important . . .’ he lowered his voice, ‘. . . about the cull.’
spaceA wiry girl with freckles stepped in front. Her pale face was fierce.‘Why should we have owt to do wi you? You’re one o’ them – we’re scum to you.’
spaceHe took his hands out of his pockets and peeled off a mitten.‘There,’ he said and looked her in the eye, ‘I’m as much of a seal-paw as any of you.’
spaceShe frowned and looked down. His hand grew cold in the damp air. Then she gave a nod and let him into their space.
space‘What do you want?’
space‘I want to put a stop to the cull.’
spaceThe lads looked at each other. He went on.‘It’s got to be stopped–they’re our families out there.’
space‘Try telling that to Nab Enders,’ she said.
spaceThe lads nodded. She went on – her voice grew less harsh.‘You’re from Lawefield, aren’t you? Different rules here – and there’s no changing them.’
space‘What if we work together? Scores and scores of us.’
spaceOne of the bigger lads leant forward. Mattie recognised him – he was a farmer’s son from Furzedale. His voice was deep and not unkind.
space‘Look, I know you mean well – but they’ve been doing it since the Vikings were here. It’s allus happened. What makes you think you can change it?’
space‘I don’t think I can – but together we could. We could drive them away – somewhere safer.’
spaceThe farmer’s lad shook his head slowly. His friends came closer.
space‘Nay – you see, they’d only come back. See, they’re like us sheep – they’re hefted to the rocks.’
spaceOne lad pointed vaguely out into the chalky mist.‘Yon’s the breeding grounds – where they’ve allus come to breed-’
space‘And allus will.’
spaceTwo of them let the ghost of a smile cross their faces.
space‘Nice idea.’
space‘But not a chance.’
spaceMattie looked around the group, willing them to listen.‘How do you know it won’t work if you’ve never tried?’
spaceHis voice rose.‘They used to do bear-baiting and cock-fighting and all sorts of horrible things in the old days– but somebody stopped them. Why can’t we?’
spaceThe girl pursed her lips, then spoke in almost a whisper.‘Keep your voice down.’She glanced round at her friends. Their faces were blank.
space‘Push off before that great gawby Tommy Flaup comes looking for you,’ she said.
spaceShe touched one of the lad’s elbows and the group sank back into the mist. After a bitter cold wait, a muffled bell told Mattie to go in. He didn’t hurry.

That evening he had to take a delivery up to the Fishermen’s Hostel. The fret still clung to Scoresby like weeds caught on thorn trees. It turned lights into dull smudges, and sounds shifted and changed between the confusing strips and tatters. Smells of coal-fires, fish-and–chips, and then kippers from Agar’s Smokehouse slid past in layers. He pushed through the mist and took the shortcut through Gillet’s Yard.
spaceThwock.
spaceA small pebble hit his parka and fell down. He stood still.
spaceThwock–thwock.
spaceHe turned towards the hidden thrower. A small voice whispered.‘This way.’
spaceSomething pale glowed in the dark entry to the back of the houses. He peered through the haze and walked towards it. A thin halo of silvery hair came into focus, then the blurry shape of a girl wrapped up in a too-big coat. Her whispers came out in little rushes.‘Summat to tell you – need somewhere safe – we mustn’t be seen.’
spaceHe pointed up the hill.‘This way then, Lorna.’
spaceThe last of the scrawny sun drained away. The mist swelled in the twilight, taking on the dim grey of forgotten cobwebs. Curtains and shutters closed, leaving plenty of shadows to hide in.
spaceHe guided her into a narrow passage between an outhouse and an old cart shed. The reek of grease and fags floated out of the Fishermen’s Hostel.‘Wait there–I’ll be back soon.’
spaceShe nodded, and her eyes darted round the passage. She pulled her coat tighter and leant against a wall.
spaceHe got the delivery over with quickly and walked back the long road round so as not to be spotted.‘Well?’
spaceLorna jumped.
space‘I’ve summat to tell you,’she said.
space‘What?’
space‘If you leave it while Sunday to stop the cull, it’ll be too late.’
space‘How come?’
space‘They dun’t want the extra pay going to outsiders. They’re going to do it earlier.’
space‘How much earlier?’
spaceThe sound of a door opening made her flinch. Her voice died away.‘I think he said …’
spaceHe took hold of her shoulders.‘How soon?’
space‘I’ve got to go.’
spaceHe gave her a shake. She squeaked, then spoke hesitantly.
space‘He said summat about full moon-’
spaceA voice bellowed out of the Hostel before she finshed.
space‘I belong to Glasgie, dear old Glasgie toon…’
spaceLoud singing echoed around the stone walls. Other voices joined in and a smell of booze thickened the air in the passage. Heavy footsteps moved close by. She pushed hard against his chest. Shook her head, lips pursed shut. The lumbering footsteps came nearer. He let go, and she ran. Her feet clattered on the cobblestones. He followed the sound into the murky twilight, half hoping for answers. The trail echoed and faded, then disappeared into the roving mists and darkness.
spaceOn his way back to Nab House, the fret blew in tatters across the rising moon. A fat moon, bulging to almost fullness.

10 thoughts on “The Secret of Scoresby Nab Episode 34”